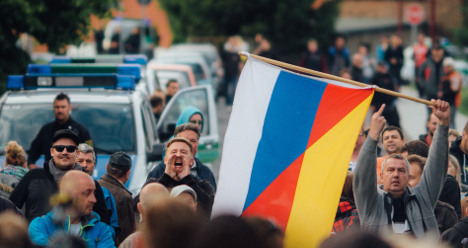 Police said that 160 people gathered in Freital, on the outskirts of Dresden, to reject the presence of refugees in their town.

A new group of around 50 asylum seekers had to enter the hotel while confronted with the signs and shouted slogans of people who didn't want them there.

Spiegel reported that the demonstrators were chanting “Criminal foreigners – out, out, out!”.

Justice Minister Heiko Maas weighed in on Thursday morning to say that “calls for violence against refugees are completely unacceptable”.

“The refugees who come to us have lost everything in their homeland” and are looking for help and sanctuary, Maas added.

Opposite the anti-refugee marchers, around 80 mostly left-wing demonstrators gathered, saying they were on the scene to prevent any attacks against the refugees.

The two sides were kept apart by around 100 police officers.

But the tension got out of hand in the late evening, when the anti-refugee demonstrators threw bottles at the left-wingers, injuring one man slightly.

Police said they had not immediately identified who threw the bottles.

“It's important to me to say clearly that a call for violence against refugees is in no way acceptable,” Migration Commissioner Aydan Özoguz told the Berliner Zeitung on Thursday.

Saxony's own immigration chief Geert Mackenroth said that “some of the expressions of the ringleaders contain calls to violence, at least between the lines”.

Freital has in the past been a stronghold of the Pegida anti-Islam movement. Pegida leader Lutz Bachmann was one of the people to call for a demonstration against the refugee accommodation.