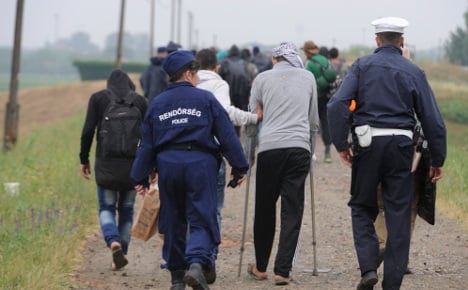 Hungarian police escorting refugees away from the border. Photo: DPA

Jozsef Czukor made the trip after his government said it would stop taking back asylum seekers who had been first registered in the EU in Hungary, but had been expelled by other countries.

Under the so-called “Dublin rules”, asylum seekers' applications must be dealt with in the country where they first arrive before they can be allowed to travel through the rest of the EU.

Foreign ministry spokesman Martin Schäfer criticized the “unilateral decision” by the Hungarians as totally counter to the mutually agreed rules.

An Interior Ministry spokesman said that the Dublin agreement was valid law “that we must insist on”.

He added that “comparable reception conditions and standards in processing asylum applications” must be created across the EU – something which was definitely not the case in some member states.

Without a Europe-wide solution to this problem, he said, the refugee crisis might in the long term threaten freedom of movement across Europe.

Hungary quickly moved to minimize the damage its statements had caused on Wednesday, in “an awkward attempt at appeasement after provoking other EU states, particularly Germany and Austria, too strongly,” Sabine von Oppeln of the Berlin Free University European Integration study group said.

Austria has also slammed Hungary's decision, especially since most of the migrants on its territory arrive from either from Hungary or Italy.

EU leaders are due to discuss Hungary's departure from the rules at a summit in Brussels on Thursday.

Hungary has recently announced plans to build a refugee fence along its eastern border.

German human rights activists said that Germany, too, was failing to respect the Dublin rules, naming the case of Kosovan Albanians who were not sent back to Hungary or Austria by the German authorities.

Thousands of people are currently stuck in countries like Greece waiting for the right to travel further north, he said.

As the Greek state faces bankruptcy, the EU might have to step in and begin offering help to refugees stuck in the country.