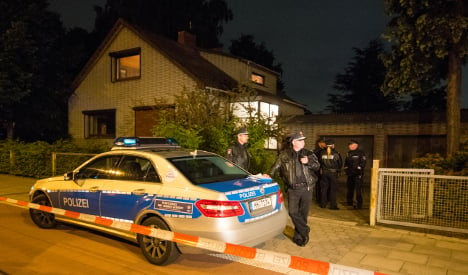 Police at the scene of the crime outside the house: Photo: DPA

A homeowner in Jenfeld, a district of Hamburg, took the law into his own hands late on Tuesday night, as two suspected burglars broke into his house.

According to police reports, the two men rang the doorbell of the detached house at around 11pm and asked the 63-year-old resident “whether there had just been an ambulance here”.

When the man said no, the pair initially left, but 15 minutes later they returned. This time the man opened his door on the chain for security, but the intruders tried to force their way in.

One of the unwanted invaders managed to get into the hallway, and he was then shot by the homeowner.

The wounded burglar staggered away from the scene and collapsed from his injury at a junction about 200 metres from the house. His accomplice managed to flee and is still on the run from police. Paramedics arrived and tried to save the wounded intruder, but were unable to prevent him from succumbing to his injuries.

After calling the police himself, the homeowner was taken in for questioning. Once he had been interrogated, and his criminal record had been checked, he was released.

The Hamburg prosecution office saw no reason to issue an arrest warrant at this time.

A very similar case a few weeks ago in Hannover ended in the death of an 18-year-old intruder. On this occasion it was a man defending his property from a group of three burglars, one of whom was armed.

The 40-year-old workshop owner shot the 18-year-old burglar, who later died from his injuries in hospital.

A police spokesman said that the shooter had a license for his weapon and that he is now under investigation for suspected manslaughter.

In December 2014, during a robbery of a jeweler's in Moers, western Germany, one of three burglars was shot dead by the shop owner.

In 2011, a pensioner in Sittensen, northern Germany, was given a suspended sentence for shooting a 16-year-old, who was fleeing after having robbed his house. The defence and the public prosecutors have since filed a revision.

Gun laws are generally strict in Germany, as licenses to own a firearm are only given when it is deemed “necessary”, for example to competitive shooters, hunters and firearm collectors or experts.

Even with one of these permits, heavier firearms, such as automatic firearms and pump-action shotguns, are prohibited.