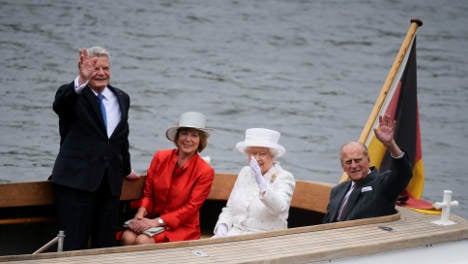 Shortly after 11 am President Joachim Gauck was entertaining the Queen at Bellevue Palace as thousands of spectators gathered on the banks of the river Spree jostling for the best view of the world's longest ruling monarch.

This was the public's first chance to see the Queen on her three-day state visit. From Bellevue, she was set to travel by boat to the Chancellery to meet Chancellor Angela Merkel, a trip of a few hundred meters.

Jessica Chamier-Gliszyznski, a 19-year-old Berliner, had staked her place right at the beginning of the Queen's short voyage.

“When she passes I want to take a selfie with her in the background. It'll make a great memento,” she told The Local.

“I was only nine the last time she came to Germany. The next time she comes will be in maybe another ten years and she's not so young anymore,” she said.

Kerstin Tratzowski. another spectator waiting near the palace shared the sobering thought that this would be the last time the Queen would come to the land of her forefathers.

“This is probably her last visit to Germany,” the 52-year-old said. “I've only seen her on television but I find her really fun, and she has become all the more pleasant the older she has become.”

When the great lady finally embarked, the boat motored up the river at an unexpectedly brisk speed. The Queen and Prince Philip were sat at the back of an elegant wood-panelled motorboat as Gauck stood in front of them pointing out landmarks as they went.

Shouts of “Hurrah!” went up from the crowd. Children screamed as they hung out of the windows of an adjacent school. And then she was gone.

Further down the river a group of school children described how they sang God Save the Queen as the boat passed.

Tarik Jiha, an 11-year-old schoolboy, said he thought she looked overwhelmed, but she still made time to wave at them.

Close by, a group of kindergarten children showed off the regal wave they had learned especially for the royal visit.

But there seemed to be a sense of bewilderment that everything was over so quickly, as the crowds lingered not quite sure where to go.

“Is she not coming back?” One bystander asked a policeman clearing up police tape.

“Not unless she's forgotten something and needs to pick it up,” the officer replied.

But died-in-the-wool monarchists had a second chance to see the Queen in the flesh. In the early afternoon she was scheduled to lay a wreath at the Neue Wache, a war memorial in the centre of town. Thousands gathered at the barriers which surrounded the square.

As the convoy approached the crowd swarmed forward and a sea of hands went up; everyone tried to push their camera that little bit higher. If one could not catch a sight of the Queen, then a personal snapshot would have to do.

Through the crowd it was impossible to see what was happening. Occasionally a soldier could be seen through the forest of arms.

But a few seconds later another voice from further in front said “She's already back at her car.”

Rolf Eggers a 72-year-old from Hamburg, said that while he hadn't come specially to see the Queen she was part of “a great tradition that we lack in Germany.”

“But I'm not jealous of the Brits,” he was quick to add. “Its like an Operetta.” Pausing for a while, unable to find the right words, he said simply “It's something.”

Lisa Unbehaun, a 23-year-old Berliner, described her as a “legend.”

“It's amazing that at such an old age she can bring out crowds of young people like a pop star,” she said.

At the cenotaph at the centre of the memorial, crowds pushed towards the door, hands straining in the air, trying to capture a picture of the royal wreath.

“In England of course it would be different. They'd be queuing,” an old lady muttered to her friend.

On the wreath was the simple inscription “Buckingham Palace. In Memory” Somehow appropriate, Just like the Queen. Short and sweet.