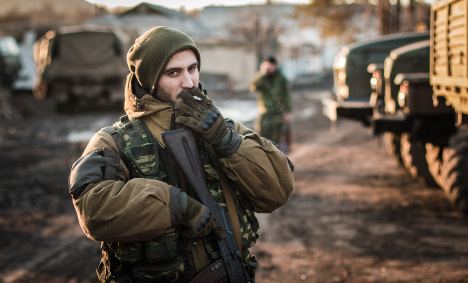 A soldier fighting for the Donetsk People's Republic pictured in February. Photo: DPA

“The chancellor and the president (Hollande) raised the need to put pressure on the various parties” given that progress is “insufficient,” the source said, a day before foreign ministers from Ukraine, Russia, France and Germany hold talks in Paris on the crisis.

In addition, NATO head Jens Stoltenberg said earlier Monday the alliance would approve plans this week to more than double the size of its rapid response force, having already created a special spearhead unit as part of the fallout from the Ukraine crisis.

The 15-month-long conflict in Ukraine has claimed the lives of nearly 6,500 people and driven more than a million from their homes.

A ceasefire agreement agreed in February in the Belarus capital Minsk has proven extremely shaky, with sporadic clashes continuing in parts of the conflict zone.