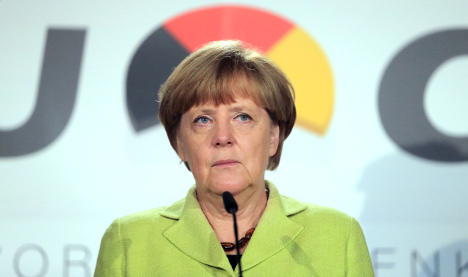 If the creditor institutions didn't give a positive evaluation to Athens' latest reform proposals, she said “today's summit can only be a discussion meeting”.

While she was aware that she was leaving only a “very short” available for the institutions to make their response known, Merkel insisted that the institutions' opinion was “of great significance” to the German government.

In fact, it was “the precondition for whether something can even be decided” on Monday – although there were “many days of time” this week to reach a decision.

Merkel also reinforced her message that Germany was always prepared to help in exchange for Greece making its own efforts – “those are two sides of one and the same coin.”

The Chancellor and other eurozone leaders will meet with the Greek government in Brussels on Monday in an emergency summit aimed at averting a looming bankruptcy in Athens, shortly after eurozone finance ministers meet in the afternoon.

Writing in the Frankfurter Allgemeine Zeitung (FAZ) on Sunday, Greek finance minister Yanis Varoufakis argued that the responsibility for resolving the crisis lies with Merkel.

“The German chancellor stands before a decisive choice. She can either enter into an honourable agreement that is principled and can help the Greek people to embark upon the road of reform, or she can throw the Greek government overboard,” he wrote.

But Foreign Minister Frank-Walter Steinmeier, speaking in Luxembourg, said that it was the Greek government that needed to move across the table.

“We all need to hope that those responsible in Greece realise that their government needs to make concessions if it wants the continued support of the ECB, IWF and Europe,” reports Spiegel Steinmeier as saying.

And as he arrived in Brussels, Finance Minister Wolfgang Schäuble was pessimistic about chances of an agreement:

But as the ministers left their gathering, Dutch finance minister and Eurogroup boss Jeroen Djisselbloem would only say that there might be an agreement “later this week”.

“New proposals from the Greek government came in this morning, which we welcomed…as a positive step,” Dijsselbloem said.

“But the institutions were unable to give us a full and in-depth assessment of the proposals” in time for the finance ministers' meeting.

A June 30th deadline for the repayment of a €1.6-billion IMF loan instalment is nearing and negotiations between Athens and its creditors have dragged on for weeks without a resolution.

Junker's cabinet chief Martin Selmayer praised the reform proposal on Twitter as a “good basis for progress at tomorrow's EuroSummit.”

Spiegel reports Greek media sources as saying the proposal includes promises of an in an extra €5 billion in government revenue over the next one and a half years. Specifically there are set to be increases in VAT for the hotel industry and for basic foodstuffs such as rice and spaghetti.

The Süddeutsche Zeitung reports that Tsipras is also prepared to significantly reduce early retirement and to raise an extraordinary tax on the country's wealthiest citizens.

Pensions are one of the main sticking points of the negotiations, with the creditors seeking drastic reform of the current system.

Greece currently spends 17.5 percent of GDP on pensions, the highest in the EU according to Eurostat.

“Make no mistake, Greece’s pension system is not sustainable and still needs major reform,” writes Alberto Nardelli in the Guardian.

FAZ is reporting that even if a resolution is reached in Monday's meeting the Greek government will be unable to pay civil servants' salaries and pensions in full for June due to a sharp decrease in tax receipts.

The DAX, Germany's benchmark index, jumped 3 percent in trading on Monday on rising hopes of a bailout accord between Greece and its international creditors.

The DAX was trading at 11360 levels, reversing recent losses, on rising hopes of a bailout accord between Greece and its international creditors.

The Athens stock market surged over seven percent at opening Monday. At 0745 GMT the ATHEX Composite index jumped 7.15 percent to 736.46 points, as traders took heart that new proposals by Greece might break deadlocked negotiations to free up 7.2 billion euros ($8.1 billion) in bailout funds.