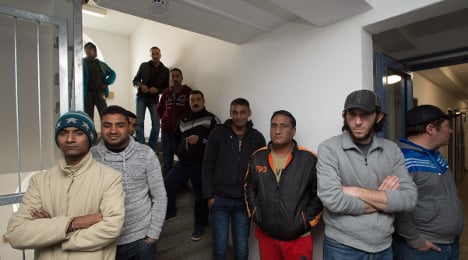 Refugees in an accommodation block in Schneeberg, Saxony. Photo: DPA

The gathering of the different layers of government agreed on motions to speed up the asylum process, do more to deport failed applicants and more quickly integrate those who stay.

Germany has been one of the biggest destination countries for people fleeing conflict in the Middle East, Africa and elsewhere, with applications for asylum growing 80 percent in the past year.

The summit was called to find ways for the country's overloaded refugee reception system to deal with the massively increased numbers.

But representatives of Germany's communes – the lowest layer of government – said that despite the progress, more needed to be done to make the policies work.

Communes' priorities were supplying people with adequate living space and avoiding conflict with other social groups, president of the German Association of Cities and Towns (Städtetag) Eva Lohse said, adding that concrete decisions on accommodation still had to be made.

She said that existing accommodation programmes had to be extended or proven programmes from the past reintroduced.

“The federal government and the states want to do more to deal properly with the growing number of asylum seekers and refugees, they see it as a task for the whole system of government,” Lohse said.

“That's an important signal for the people who come to us for protection when they're in need, but also for the communes who want to deal with their integration on the ground.”

Lohse added that there needed to be a nationwide single system for the states to pay back the costs incurred by communes in the process.

“It can't remain the case that some states reimburse the costs almost completely, while others only pay back about a quarter of the communes' spending.”

“We expect that communes should be integrated into the working group on restructuring asylum seekers and refugees' reception,” manager of the Federation of German towns and communes Gerd Landsberg said. “Towns and communes have to be at the table.”

Baden-Württemberg minister-president Winfried Kretschmann said that the states and federal government had a lot of wrangling still to do over costs.

But he welcomed the federal government's agreement to begin paying a share more regularly from 2016.

“We will nevertheless still have to negotiate hard over the level of that share,” he said.

His colleague Malu Dreyer from Rheinland-Palatinate said that “we have reached something important together, but this can only be the first step”.

And Olaf Scholz, mayor of the city-state of Hamburg, said that the refugee summit had sent a “positive signal” that together the states and federal government would face up to the challenge.