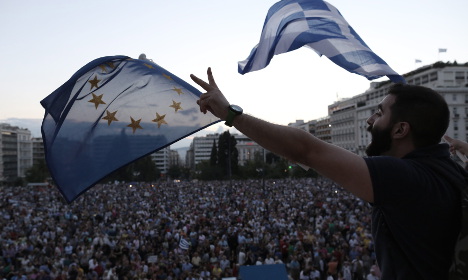 “It's still possible to have an agreement,” said eurogroup leader and Dutch finance minister Jeroen Dijsselbloem, “but there's only a little time left.”

Greece and its creditors must reach agreement before the country runs out of money at the end of June.

Even as the finance ministers debated in Brussels, ordinary pro-EU Greeks demonstrated outside the parliament in Athens, calling for their leaders to keep the country in the Union.

Eurozone leaders will gather in Brussels just a few days before an EU summit involving all 28 heads of state and government on Thursday and Friday.

Dijsselbloem said that the eurozone is “ready for any eventuality” – meaning a possible Greek exit from the single currency – in comments agreeing with those made by Bundesbank (German central bank) chief Jens Weidmann on Thursday.

The eurogroup leader's comments were significantly sharper than those Merkel made before the Bundestag (German parliament) on Thursday.

In a government statement she told assembled MPs that “where there's a will there's a way,”.

“Germany's efforts are aimed at Greece staying in the Eurozone,” she went on – although she made it clear that the Euro would survive Greece leaving.

Some experts suggested that Putin might make an advance payment to Greece that would allow Tsipras' government to soldier on.