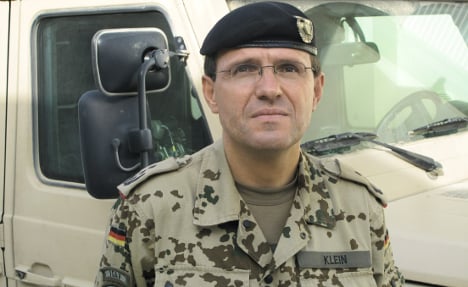 Colonel Georg Klein will not have to stand trial for his role in a deadly air strike on the Afghan city of Kundus in 2009.

The Constitutional Court in Karlsruhe ruled that a decision made by the Federal Prosecutor's Office in 2010 to end the case against the former army Colonel could not be called into question.

On September 4th 2009, Klein ordered the bombing of two fuel tankers hijacked by the Taliban in northern Afghanistan, reportedly on the grounds that they could be used as 'rolling bombs' against nearby German army bases.

Official reports put the deal toll at 102, a number that included numerous civilians who were trying to extract gas from the tankers. Klein had told investigators he believed the people around the trucks were insurgents.

After the army had looked into the case and the Federal Prosecutor's Office followed suit, the investigation was closed down in April 2010.

But the case was reopened when a father of two victims appealed to Germany's highest court for further investigations into the matter and a criminal trial to be brought against Klein and a further sergeant who took part in the strike. The court ruled that the basic rights of the victims' families had not been harmed by the prosecutor's original decision. The ruling made clear the judges' belief that the prosecutors had seriously dealt with the constitutional significance of the 'requirement to protect life' and that they had not handled the investigation 'haphazadly.'

But legal proceedings into the air strike are still not over.

At the High Court survivors are currently suing for damages.

“If necessary we will go all the way to the European Court of Human Rights,” said victims' lawyer Karim Popal.