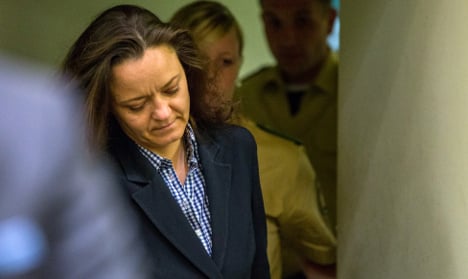 Her trial has been going on for almost exactly two years and throughout the entire process Zschäpe has held her silence. But on Wednesday she spoke, albeit only to say the single word ‘yes.’

The majority of the murders were directed against people with immigrant backgrounds and the motives are widely accredited to the group's racist ideology.

Two other NSU members, Uwe Mundlos and Uwe Böhnhardt, who are believed to have executed the murder, were found dead in 2011 in an apparent double suicide.

On Wednesday the court in Munich had invited three employees of Hesse secret services to give evidence into the murder of Halit Yozgat in an internet cafe in Kassel in April 2006.

An informant for Hesse secret services was known to be present at the scene of the murder.

The court had invited the secret services agents to explain outtakes from recorded conversations with the informant.

At one point during the proceedings the judge interrupted the recording to ask Zschäpe whether she was keeping up with proceedings. “Yes,” she was heard to say quietly.

Zachäpe has recently been in a dispute with her legal team after she tried to have one of her lawyers fired last week. During proceedings on Wednesday she was not seen talking with them.

The NSU are the most notorious murderers in recent German criminal history. They have raised questions about the competence of the German internal intelligence agencies as well as the potential existence of a sophisticated and well-financed neo-Nazi underground scene.

Note: This article has been corrected to state that the ten murders were committed between 2000 and 2007. The Local regrets the error.