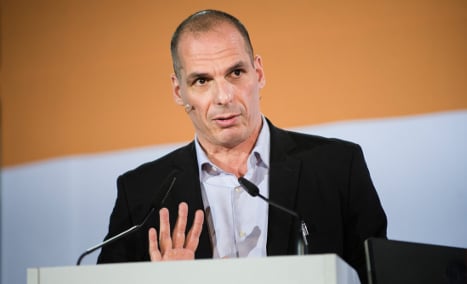 Asked whether he intended to present a list, he replied “No – because the euro-group is not the right place to present positions and proposals which have not already been discussed at the negotiating level.”

But, he said the Greek government is “ready at any time to to find a binding agreement with our partners”.

Greece's €240 billion bailout expires on June 30th, and to meet that deadline, a reform deal must be resolved by the meeting in Luxembourg on Thursday of the eurozone's 19 finance ministers, who control the purse strings of the rescue programme.

Also at the end of the month, Greece faces a €1.6 billion payment to the IMF with another €6.7 billion due to the European Central Bank in July and August, which Greek officials have said the government cannot afford.

In the interview, Varoufakis also called for Chancellor Angela Merkel to show leadership on the Greek debt crisis.

He said Merkel should follow the example of James F. Byrnes, US Secretary of State under Harry S. Truman and give a ‘Speech of Hope.’

Byrnes gave his speech in Stuttgart in 1946 where he offered Germany the olive branch of reconciliation.

“From this speech came the German ‘economic miracle.’ But somebody had to take the initiative, someone had to show leadership, to announce the end of punitive measures that would otherwise have hindered Germany’s economic development,” Varoufakis said.

“With a speech of hope, Frau Merkel could take over that position of leadership today – not only for Greece, but for the whole of Europe.”

Meanwhile the Süddeutsche Zeitung (SZ) reported on Monday that eurozone leaders have developed an emergency plan to avoid a run on Greek banks should there be no agreement by the end of the week.

Without citing sources, SZ reported that the plan calls for Greek banks to be closed for several days from next week to prepare them for the measures, which still need to be ratified by the Greek parliament.

Withdrawals from ATMs as well as electronic payments in Greece and abroad could also be restricted, it said.