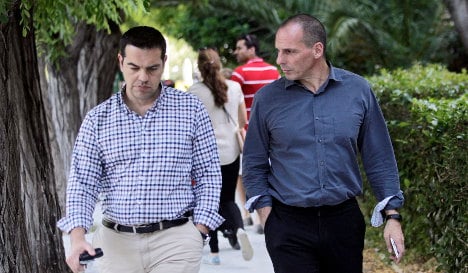 “The ball is in Greece's court,” a finance ministry spokesman told a Berlin press conference, a day after discussions in Brussels between Athens and its international creditors again collapsed.

“It is exclusively up to the Greek side to respond to the generous offer of the institutions” – the European Union, European Central Bank and International Monetary Fund – stressed the spokesman, Martin Jäger.

The statements from Germany, the EU's biggest economy and effective paymaster, contrasted with that of Greek Prime Minister Alexis Tsipras, who wrote in a newspaper that “we will wait patiently until the institutions become more realistic”.

The German finance ministry spokesman warned that “time is running out” in the talks between Greece's left-wing government and the three international creditors, who were however working “tirelessly and with full commitment”.

Greece faces an end-of-the-month deadline to repay €1.6 billion to the IMF, with analysts warning that there is now more of a chance of a default than ever before, which could see it tumble out of the eurozone.

The creditors are demanding reforms in return for the last €7.2 billion euros of Greece's €240-billion bailout, which expires on June 30.

To meet that deadline, hopes are focused on a meeting of the eurozone's 19 finance ministers in Luxembourg on Thursday.

“We want Greece to remain in the euro,” he said.

“Greece must … agree with the three institutions on a reform package that overall leads to the necessary fiscal and structural results, and for that Greece must lay out the steps with which it will achieve this.”

“Only [with debt cuts] can we guarantee the repayment of as much of our debt as possible and actually deliver,” Varoufakis told Bild on Monday.

He claimed that he would immediately agree to further financial aid from the country's creditors – which he and Prime Minister Alexis Tsipras have until now resisted due to the harsh conditions attached to it – if some of Greece's debts could be cancelled.

The International Monetary Fund (IMF), one of Greece's three creditors, agreed that the country's debt should be restructured, Varoufakis said.

He was backed up by IMF chief economist Olivier Blanchard, who wrote in a blog post on Sunday that while Greece should agree to reform its VAT and pensions, the EU needed to be prepared to reach compromises.

His comments came the day after talks between Greek and European Commission negotiators broke down on Sunday over what leaders on both sides called deep differences.

German Economy Minister and Vice-Chancellor Sigmar Gabriel wrote in Bild on Sunday that “not only is time running short, but also patience all over Europe.

“Everywhere in Europe the feeling is growing that this is enough!”

He argued that endless brinkmanship from the Greek government was making the whole negotiating process “laughable”.

“The game theorists in the Greek government are in the process of gambling away the future of their country,” he wrote, “and Europe's along with it.”

Greece risks bankruptcy if it does not pay back €1.6 billion to the IMF by June 30th.