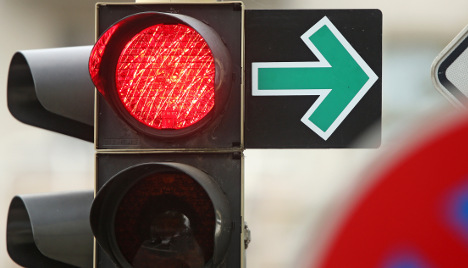 The traffic light stands at the intersection of four different streets just south of the river Elbe. It instructs drivers who want to drive straight ahead to wait. Those who wish to turn right into Güntzustraße can do so at any time as long as they take due caution.

But anyone who waits to cross into Gerokstraße could be waiting a long time – almost three decades if they are patient enough.

That this traffic light has never changed to green is no accident. It has been planned so by the city administration.

And the total cost of maintaining this one traffic light over almost three decades runs to roughly €150,000. Every year maintenance and running costs come to €5,500.

While this may seem nonsensical and a waste of money to your average motorist, the Dresden authorities can explain in exact detail why the light never changes colour.

And their explanation might show another habitat that dies hard – a love of convoluted, self-defeating regulation.

“The administrative regulation as set out in section 37 paragraph 2 of the of the transportation regulations alludes to the need for an exact plan for traffic light signals,” a spokesperson told The Local.

The planning of the junction is based upon directives set out by The Research Institute for Street Transportation.

“Because the green light means ‘transport is free to go’ all the other lights in conflict to this one must show red. That also includes the light on Ziegelstraße.”

“The red light instructs: stop at the intersection. After stopping one is also allowed to turn right if there is a sign to the right of the traffic light that shows a green arrow on a black background.

“Because on Ziegelstraße one is only allowed to turn right, in accordance with regulation 27 section 37 of the transport regulations, we can do without using the traffic signal’s green light.”

All well and good. But why not simply do away with the red light? Would a sign not do?

“As long as Ziegelstraße has access to the junction, we cannot get rid of the traffic lights,” said the spokesperson. “Stop signs do not correspond to traffic light systems and do not  fulfill the same set of regulations.”

So, we are all clearer for that then.

But the truly puzzling thing, reports Berliner Zeitung, is that included in annual maintenance costs are not only replacement red light bulbs, but amber and green ones too.