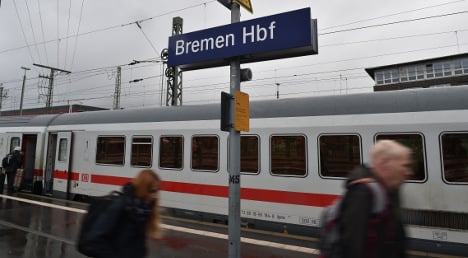 The train was on its way from Bremen to Hannover when the young man realized a ticket collector was approaching him and he didn’t have a valid ticket.

Rather than pay up the roughly €10 the fare from Bremen to Verden would have cost him, the man decided to take an altogether more spectacular course of action.

A spokesman for the Bundepolizei (federal police) told The Local that this decision could have cost the man his life.

There are so many signals and wires next to the line that he could have easily had a very serious accident, the spokesman said.

Luckily the man didn't encounter any obstacles in his descent, but he injured his leg badly as he landed.

Nonetheless he got up and attempted to keep running. But after a few seconds he could go no further and collapsed on the embankment next to the track.

The line was immediately shut down and the driver of an oncoming train saw the man lying by the track, got out and gave him first aid.

The miscreant was later arrested and taken to hospital. He will now face charges of misuse of a train's emergency facilities. It is unclear whether he will still be expected to pay the fare.