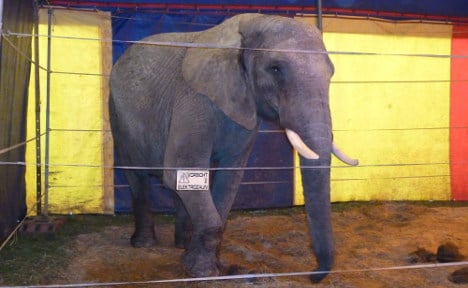 The African elephant, named Baby, escaped from the Francordia circus, near Buchen, Baden-Württemberg, in the early hours of Saturday morning.

At the same time, 65-year-old pensioner Alexander H. was on his morning stroll collecting bottles.

When Baby encountered Alexander at around 5am, she crushed him against a metal fence, killing him on the spot.

Circus owner Mario Frank claimed to Bild on Monday that a group of animal rights activists who had camped out in protest outside the circus earlier in the week had damaged the enclosure, allowing the 34-year-old elephant to escape.

Police are now investigating whether the elephant was deliberately let out or if the cage was not locked properly by accident.

“The criminal police [CID] has launched a unit to investigate the death,” a police spokesman told The Local.

“If it turns out that there was negligence, or someone deliberately opened the cage, then there will certainly be criminal proceedings.”

However they refused to comment on speculation regarding Frank’s allegations in the media against the animal rights group.

According to Bild, the elephant has a history of causing injuries, including breaking the jaw of a 12 year-old boy. The animal has also escaped from the circus several times.

Biologist Tobis Dornbusch, who examined the elephant two months ago, told the newspaper that “it was and remains known that this elephant is dangerous”.

He said that he found signs of neurosis – “an indicator for bad behaviour” – in Baby's psychological profile.

Stefan Frank, the animal trainer and other circus boss, had been known to take the elephants on walks outside the circus in nearby towns. The circus, formerly known as Luna circus, had been the subject of controversy following Peta’s accusation that an elephant was kept in a truck that wasn’t adequately heated, and kept in captivity only for the purpose of entertainment.

Activists have also sharply criticized the conditions in which animals were kept in the past.