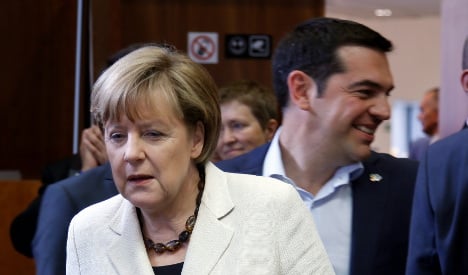 Greek Prime Minister Alexis Tsipras met with Angela Merkel and Francois Hollande on the sidelines of an EU-Latin American summit in Brussels in a bid to hammer out a reform plan after five months of stalemate.

“We decided to intensify efforts to resolve the differences that remain and to move towards a solution,” radical leftist leader Tsipras told reporters after the three-way meeting broke up without a deal.

“The European leaders realised that we must offer a viable solution and the chance for Greece to return to growth.”

Merkel and Hollande left without commenting, but a German government statement stuck to the same line, saying the leaders had agreed the talks “must be intensified”.

Greece's creditors have refused to release the last €7.2 billion remaining in its EU-IMF bailout, which is due to expire on June 30, unless Athens agrees to tougher reforms.

Without the cash Greece will be unable to pay its foreign debts, having already had to tap up local municipalities to meet earlier commitments, and a default could send it crashing out of the euro.

Tsipras is set to hold further talks with European Commission chief Jean-Claude Juncker on Thursday, after meeting him briefly on the sidelines of the summit on Wednesday.

The Greek premier's anti-austerity Syriza party won elections in January with a promise to end the “humanitarian crisis” caused by five years of austerity imposed under two international bailouts since 2010.

Athens has strongly rejected many reforms, such as pension reforms and changes to Greece's sales tax, creating a stand-off with its creditors.

Time is now running out for a deal as any agreement must be approved by finance ministers from the 19-country eurozone at a meeting in Luxembourg on June 18, and then voted on by several national parliaments.

Wednesday's trilateral meeting was a bid to breathe new life into the stalling debt talks.

The European Commission, one of Greece's three bailout monitors along with the European Central Bank and International Monetary Fund, had just hours before the meeting rejected Athens's latest reform proposals as insufficient.

Greece submitted the plans on Tuesday in response to tougher proposals made by Juncker at a dinner with Tsipras in Brussels a week ago.

The dinner ended disastrously, with Tsipras later telling Greece's parliament that Juncker's suggestions were “absurd” and Juncker using a G7 summit in Germany to upbraid the Greek premier for acting improperly.

But they were all smiles for the camera again on Wednesday, with a jovial Juncker bear-hugging and kissing Tsipras in front of other leaders at a two-day summit of Latin American, Caribbean and European Union leaders.

Greece showed signs of compromise on key sticking points with its creditors on Wednesday, particularly over its budgetary surplus targets – the difference between governmental tax income and expenditure.

“There is no deal for a one percent surplus, but the question is on the table,” a Greek government source said, referring to a budget target for 2015 that Athens has so far dismissed on the basis that it would require more austerity.

Greek officials also said they were discussing a possible extension of the bailout until March 2016, which would give more time to work out a long-term solution and ensure Athens does not lose access to the last 7.2 billion euros.

The bailout has already been extended twice, once in December and again in February.

In a sign of its perilous situation, last week Greece said it would bundle all of its payments due to the IMF in June, making a total of 1.6 billion euros due at the end of the month, becoming the first country since Zambia in the 1980s to choose that option.

S&P cut its rating for Greek bonds to deep-junk “CCC” on Wednesday, saying it appeared to be prioritising pension payments before its foreign debts, in a move that will further hurt Greece's ability to borrow on the markets.