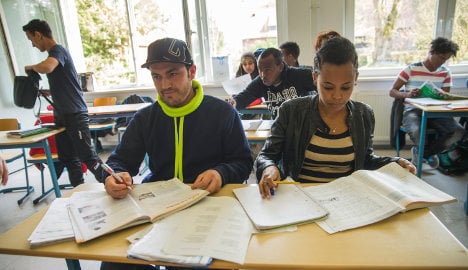 Migrants in a German class in Hesse. Photo: DPA

The report compares how successfully immigrants are integrated in 38 industrial nations in a points-based ranking – called the MIPEX index – put Germany in the top ten for the first time since the index was first published in 2004.

Countries were awarded a total out of 100 points. Germany improved on its score from 2011, the year of the last report, by three points to reach a total of 63 points, reports Der Spiegel.

Germany thus scored slightly above the west European average of 60.

Germany, they write, is one of the few industrialized nations where attitudes to immigration are improving.

As an illustration, the reports authors pointed to a survey which showed that 72 percent of Germans believe non-EU citizens should have the same legal rights as Germans.

A particular improvement that counted in Germany’s favour, writes the Süddeutsche Zeitung, was the passing of the Annerkenungsgesetz – the law of recognition – in 2012 which made the process by which foreign professional qualifications are officially recognized much smoother.

In terms of job opportunities German was the fourth best country on a level with Canada, a country with a much longer history of inward migration.

The report notes that 78 percent of immigrants in Germany are in work. Only in Switzerland, Iceland, Norway and Sweden are the numbers better.

The relative ease with with which one can get citizenship in the Federal Republic also counted in Germany’s favour. That being born in Germany enables one to gain citizenship is “trend-setting” said the report’s authors.

But counting against Germany was the fact that it is still difficult for German citizens to carry the passport of a second country.

The fact that immigrant children can only get a second nationality under specific conditions was regarded as too restrictive.

Germany is the only major industrialized nation not yet to have embraced dual nationality, the authors point out.

The report also criticized Germany for the restrictions placed on whole families moving to the country together.

Arguing that one feels naturally happier when one is surrounded by family, the researchers said that German laws put the Federal Republic considerably below the average in this regard.

In terms of equality in the workplace Germany also did poorly. It is just as difficult for immigrants to take their employers to court over workplace discrimination as in the Czech Republic or Turkey, the argued.