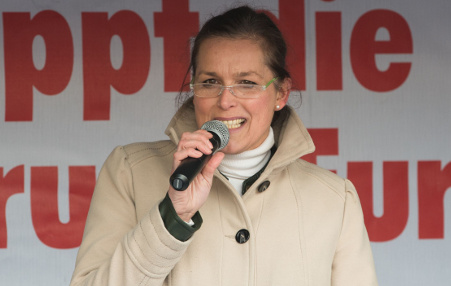 Festerling had managed to draw 9.6 percent of votes in Sunday’s ballot, but told a rally on Monday that she had decided to withdraw before a run-off election on July 5th.

She urged supporters to instead vote tactically for the pro-business Free Democratic Party (FDP) candidate Dirk Hilbert, claiming she didn’t want to “split apart the conservative middle-class to which we belong.”

Social-Democratic Party (SPD) candidate Eva-Maria Strange emerged as the front-runner in the first-round vote with 36 percent.

Hilbert was close on her heels at 31.7%, meaning that Festerling's endorsement could easily tip the balance.

A 50% majority is needed to take the Dresden town hall. If candidates fail to obtain the needed percentage then the seat will go to the candidate with the most votes.

Pegida – which stands for “Patriotic Europeans Against the Islamization of the West” – drew worldwide attention in recent months for its harsh anti-Islam, anti-migraton stance.

January saw marches draw crowds of 25,000 supporters, although recently numbers have dwindled, with marches now only attracting around 2,000 people.

The movement grew so significant in the public imagination that Chancellor Angela Merkel used her televised New Year message to ask people to remain tolerant of immigrants and refugees.

Pegida was also surrounded by controversy back in February when a photo of founder Lutz Bachmann styled as Adolf Hitler emerged online.

While the leader was reinstated just a month after stepping down, the negative publicity and the departure of much of the group's leadership have sapped its momentum.

The previous Mayor of Dresden was Helma Orosz of the CDU, who resigned for health reasons in February.