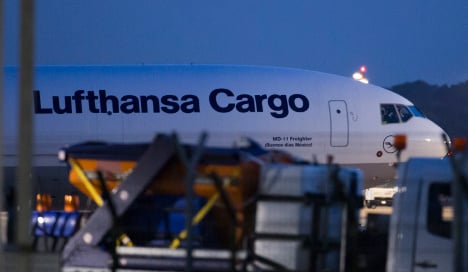 A special flight operated by Lufthansa carried the remains of 44 Germans, among the 150 onboard when the jet crashed on March 24, from the southern French city of Marseille to Düsseldorf in western Germany.

The coffins were loaded into the Lufthansa MD-11 cargo plane as rain fell at Marseille's Marignane airport and the flight landed in Germany shortly after 2030 GMT, a spokesman for the airline said.

Lufthansa is the parent company of budget airline Germanwings.

A total of 72 Germans had been onboard the doomed Airbus A320, which was heading from Barcelona to Düsseldorf when it crashed in the French Alps.

Brice Robin, the French prosecutor who is leading the investigation into the crash, is due to meet Thursday with relatives of some of the other victims to discuss the identification and repatriation of remains.

Last week the families of some of the 16 teenage victims from the same German high school angrily complained to Lufthansa after they were told the repatriation would be delayed due to problems with the issuing of death certificates. Lufthansa later said the flight would go ahead as initially planned.

The teenagers, from the northwest German town of Haltern, had been flying back from an exchange trip to Spain.

“After this first special flight to Düsseldorf, the other victims will be gradually transferred to their home countries in the coming weeks,” Lufthansa said.

“The French authorities are working hard in order to create the formal conditions for the transfer of the victims as soon as possible.”

“Lufthansa is in close contact with the relatives to ensure that the transfer of the victims is carried out according to the relatives' wishes.”

Investigators last month finished identifying the remains of all 150 people aboard Germanwings Flight 4U 9525.

They say that 27-year-old German co-pilot Andreas Lubitz, who had a history of severe depression, intentionally downed the plane.