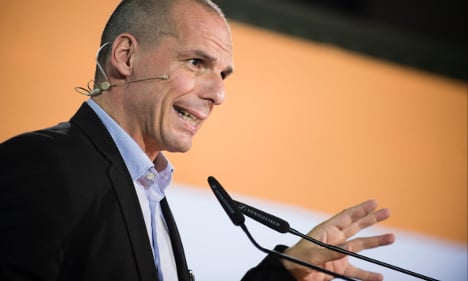 Varoufakis said that he couldn't ask Greeks to go through further painful pensions, labour market and tax reforms when the country's economy was not even growing.

“It's as if you were hitting a sick cow to make it give more milk,” he told Tagesspiegel later. “That will kill her.”

Chancellor Angela Merkel is due to meet Greek Prime Minister Alexis Tsipras in Brussels on Wednesday along with French President Francois Hollande.

“Every day counts as we try to get the necessary work done,” Merkel said after the G7 summit of heads of leading economies on Monday.

The trio will try to find common ground for a bailout agreement that will allow Greece to avoid bankruptcy – and a possible exit from the eurozone – when its previous aid programme runs out at the end of the month.

Greece's 'Troika' of creditors, including the European Commission, European Central Bank (ECB) and International Monetary Fund (IMF) have demanded that the Greek government undertake harsh reforms to access a further €7.2 billion of aid.

Without that cash, the country is likely to go bankrupt and be forced to quit the single currency.

But Varoufakis remains combative, arguing to Tagesspiegel that the creditors are the ones trying to undermine any chance of an agreement.

“You only make such a suggestion [as the creditors have] when you don't actually want any agreement at all,” he said. “The institutions [Troika] haven't made any concessions.”

EU Commission President Jean-Claude Juncker remained publicly tough at the G7 meeting, saying on Sunday that “to have a friendship, you have to stick to a few minimum rules”.