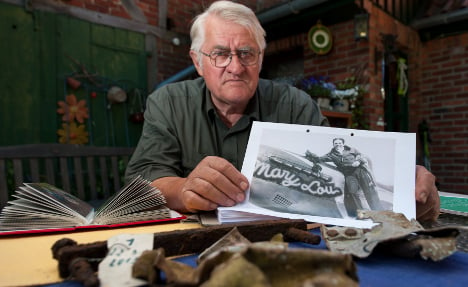 Manfred Römer holding a picture of John William Herb at the scene of his murder. Photo: DPA

On April 13th 1945 John William Herb and Manfred Römer crossed paths. The Lieutenant from Ohio was 23 and the boy from Eastern Prussia just five when the German youngster witnessed the pilot's burning aircraft crash between Niedersachsen and Mecklenburg.

Römer, who is now in his seventies, hasn't let the image go all these years, and as an old man he looked into the story of the Lieutenant.

With the help of the US and German authorities he has discovered a war crime, finally put the man to rest, and created understanding between nations.

“Even after 70 years the image of the burning plane never left me,” said Römer.

“There was this man who nobody knew what happened to. My father didn’t return from Russia, and nobody knows where he went. Somehow I've always thought that a family in America was living with the same grief,” he continued.

This is the Herb family, which is proud of its American and German heritage. “He was the only child of my great uncle,” said Michael Herb, 62, who lives near Cleveland, Ohio.

“We just knew that he was missing in Germany. Right up until their deaths, his parents never got over the fact that they didn’t get certainty about their son,” he added.

Michael often heard the story as a kid, and told it to his children. He never would have thought he would be able to tell it to the end.

Römer became a kind of detective, rummaging through records and writing to various authorities.

“Lots of people were tight lipped about it, but eventually two different witnesses told me exactly the same story,” he said. That story is that 25 days before the end of the war Herb miraculously survived the crash of his P-51 Mustang fighter, but then two people in uniform came and shot the 23 year-old dead.

His body was then searched and hastily buried face down in a shallow grave.

Römer followed what clues he could find, and after years of looking found the place in the woods where it all happened.

Experts from the US, who look for fallen soldiers around the globe, traveled to the scene and found a skeleton with a bullet hole in the skull.

The bones, completely preserved, were still in the pilot's uniform complete with life jacket and headphones.

Final identification of the body was possible because of a ring on his finger. It was John William Herb. “Our first reaction was: is this a con?” said Michael Herb. “When we found out that this German had found William's body, we couldn’t believe it. It's the most unbelievable story I have ever heard. This German, Manfred, who I'd never met before, just brought William home,” he said.

The remains of the pilot are to be laid to rest at Arlington military cemetery in Washington D.C on June 18th.

“I don’t like funerals for heroes, but this man was shot dead in cold blood, as he fought against the Nazis. This makes him just as good as a hero.” said Römer.

Despite the war crime, Micheal Herb doesn't see any bad feeling in his family towards Germany. “We are Germans ourselves anyway. I lived in Kaiserslautern for three years in the 1970s, and I sensed no sympathy for the Nazis whatsoever. Quite the opposite actually.” he said.

More than 50 million people were killed in the Second World War, but the story of John William Herb and Manfred Römer shows that the fate of every individual counts, even 70 years later.