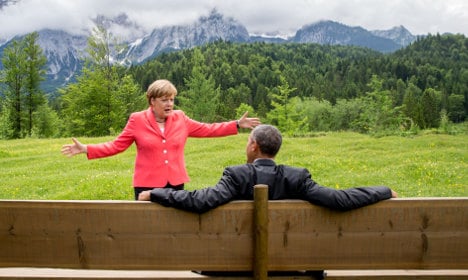 Angela Merkel and Barack Obama at the G7 summit in Elmau. Photo: DPA

Chancellor Angela Merkel again proved her remarkable ability to charm both left and right with her policy agenda at the G7 meeting of leading economies.

The left-wing daily TAZ described the progress made on climate change as “spectacular” while the conservative Die Welt described the summit as a “complete and utter success.

It was the liberal newspapers Die Zeit and Süddeutsche Zeitung that had more of a problem with the summit, which complained about the expense for the proceedings and the lack of real content.

Richard Herzinger, writing for Die Welt saw the summit as a success from every possible angle, although he gave most importance to the unity which “the western nations” showed against Russia.

“A clear signal went out to Putin’s Russia: the west won’t be divided and is sticking to a clear judgement on the way Moscow is breaking international law,” he wrote.

He added that the summit was a great marketing tool for the success of western values, saying “protest was not only allowed, it was welcomed.”

Andreas Mihm, writing in the business-oriented FAZ tended to agree

“The G7 summit sharpened the awareness among the participants of what they have in common. When North America, Europe and Japan are united they can still put important change in motion,” he wrote.

TAZ’s Malte Kreutzfeldt was impressed by the progressive agenda Merkel put on the table saying she “managed to get more out of the stiff ritual than many critics expected.”

“She saw to it that in the final declaration the heads of state made notable announcements. The most spectacular of these was the target to de-carbonize the world economy in the course of the century – essentially an Energiewende [Germany's process of energy transition] for the whole G7.”

But Kreutzfeldt warned that Merkel must push through energy reforms at home, particularly the abandonment of brown coal, if she wants to hold onto the credibility which her Elmau success has given her.

'As political as a church convention'

Christian Krügel in an article headlined “The most expensive photo-shoot Bavaria's ever seen” was highly cynical about the Bavarian state government's motives for hosting the summit in the southern state.

Writing in the Süddeutsche Zeitung, he points out that, of the summit’s €150 million costs, Bavaria footed €92 million of the bill.

“It was the perfect cosmetic with which the state government could disguise the fact that in heavenly, beautiful Bavaria there are also many earthly problems.”

“It is easy to feel triumphant when there are 24,000 policemen on watch and you’ve dished out hundreds of millions of euros,” he goes on to argue, ridiculing the communal back slapping that went on among the state's political elite.

“The true heroes of the summit are not the heads of state – it is the police who carried out mindless jobs under difficult conditions… And it is the several thousand demonstrators who showed that protest can be peaceful and creative,” wrote Krügel

Theo Sommer, Die Zeit’s lead opinion writer was similarly critical, complaining that the two day event was “as political as a church convention.”

“The small amount that really came out of the discussion – for the most part non-binding declarations of understanding rather than binding agreements – could have also been achieved by telephone.”

Sommer was particularly aggravated by the lengthened sanctions which were announced against Russia, arguing that they had no clear goal.

“Should they stay in place until Putin gives the Crimea back, which neither he nor any successor will ever do?’

Moreover the agenda of the summit was “hopelessly overloaded” and “lacking focus”, he said.

While in this day and age we can’t expect a nine-month marathon like the Congress of Vienna in 1814/15 “it would be more sensible to have continual ambassadorial conferences for specific problems.”