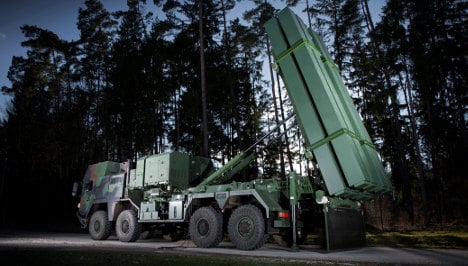 The project is likely to be the most expensive procurement item in the coming years and is Defence Minister Ursula von der Leyen's biggest outlay since taking up her post.

Christian Democratic Union (CDU) defence spokesman Henning Otto said that the system would “close an important capability gap for the protection of our country and our soldiers on deployment.”

Von der Leyen has made reforming military procurement one of the main aims of her tenure.

Bundeswehr troops have been plagued with equipment shortages and breakdowns for years as successive governments have failed to address procurement problems and watched costs of headline projects spiral out of control.

The MEADS contract, with new clauses to protect the government from increased costs in case of delays and problems, will be the first big test of von der Leyen's success.

MEADS was developed by branches of MDBA missile systems in Germany and Italy as well as Lockheed Martin in the USA and is designed to defend against attacks by aircraft and missiles.

Each unit consists of a radar system, a launch ramp and a command post. The army is expected to buy between eight and ten units.

Around €4 billion has already been spent on the project, including €1 billion of German public money.

Equipping the Bundeswehr with the new missiles is expected to cost a further €2-3 billion.