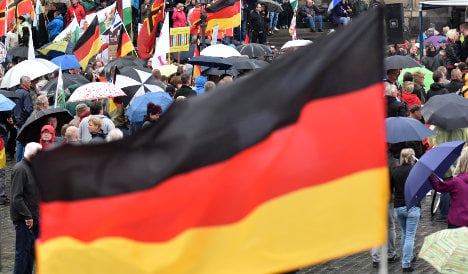 In what was PEGIDA's first appearance at the ballot box, candidate Tatjana Festerling came fourth in the city's polls, sparked after the conservative mayor resigned for health reasons, with 9.6 percent of the vote.

The only opinion poll published ahead of the election, by the Technical University of Dresden, had predicted she would secure between just one and two percent of votes.

The surprisingly strong showing is likely to be hailed as a success by PEGIDA, which stands for “Patriotic Europeans Against the Islamisation of the Occident” and at its height brought up to 25,000 people onto the streets of Dresden, although later rallies attracted smaller crowds.

The group, founded late last year, has also been weakened in recent months by internal strife and scandal among its leaders, yet it still managed to spur PEGIDA clones in other cities, while also sparking often far bigger counter-protests.

The best score in Sunday's first round went to Eva-Maria Stange, the joint candidate for the Social Democrats, Greens and far-left Linke, who took 36 percent, followed by a candidate from the pro-business Free Democrats (FDP) with 31.7 percent.

The conservative candidate from Chancellor Angela Merkel's CDU party came third with 15.4 percent of the vote, spelling yet another loss of a large city for the Christian Democrats.

The mayoral race is set to go to a second round run-off on July 5 after no single candidate managed to win an absolute majority.

Figures dating from 2012 show that Dresden, one of Germany's 15 biggest cities, has the fewest foreigners, at about seven percent.

And as a region, Saxony is among the states with the smallest immigrant population at 2.8 percent.

In her campaign speeches, 51-year-old Festerling called for a “renaissance” of German culture and condemned asylum seekers who have “left family and home because here there's somewhere nice to live and you get dough from the state”.