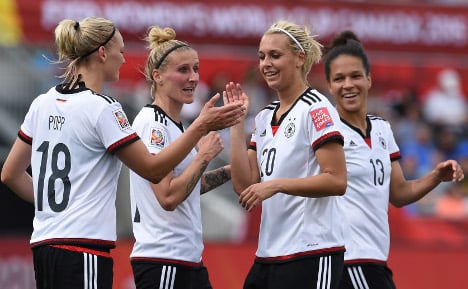 Germany are ranked the best team in the world, and the Ivory Coast are the lowest ranked side in the tournament (67) so the gulf in class was no surprise.

The crowd of 20,000 fans at the Lansdowne Stadium in Ottowa didn’t have to wait long for the avalanche of goals. The minnows received a baptism of fire, as giants Germany made it 1-0 within the first three minutes.

A first half hat-trick from Celia Sasic and two more from Anja Mittag put the Germans 5-0 up at the break.

The miraculous Ivory Coast comeback did not materialize and they leaked another five goals in the latter stages as their players tired while Germany cantered to a crushing victory. The tournament features a new format this year with 24 teams instead of 16, so the higher number of weaker teams means that this kind of result was almost inevitable.

But to score ten in an opening match is still an incredible feat.

“We had the right attitude. Now it looks as if the Ivory Coast weren't good enough, but going 1-0 up inside three minutes was incredibly important in crushing their spirit,” said team coach Silvia Neid at the final whistle.

The tournament has caused controversy by deciding to use artificial turf, which met resistance from lots of the teams.

Before the start of the tournament Neid said that “Artificial turf is totally new territory. We’ve noticed that you can’t play so much on the run, but have to pass much more to feet.”. She will therefore be especially pleased with the outstanding display by her players. Germany next play Norway, who also comfortably won their first match against Thailand 4-0, on Thursday.

The tournament organizers will be pleased about the goal-fest the fans were treated to, but the gulf in class could be a worry. What they will want to see is high quality, competitive football. Otherwise the decision to extend the tournament to 24 will come into question.

A record one billion TV viewers are expected to tune in to the finals in 187 different countries, a clear sign of the strides the women's game is making internationally.

Germany are one on the main tournament favourites, and they have become used to the sweet taste of success having won the World Cup in 2003 and 2007, and the last six European Championships.

This particular group of players will be even more desperate to take the trophy home after losing to eventual winners Japan in the quarter finals of their home tournament in 2011.