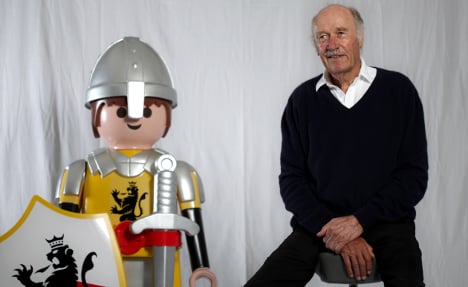 Horst Brandstätter, the man behind Playmobil in 2010. Photo: DPA

With Playmobil, Brandstätter revolutionized the toy industry, and today it is hard to imagine any child's bedroom without the famous toy figures.

But others will now have to continue his work.  A spokesperson for the Geobra Brandstätter group announced on Monday that he died last Wednesday at the age of 81 following a serious but short illness.

“With Horst Brandstaetter the Playmobil family loses not just its chief, company owner and patriarch but the toy sector in Germany also one of its most distinguished personalities,” the company said in a statement.

The firm has only just broken the news because of company holidays which ended on Sunday.

Until his death, Brandstätter was the single owner of the company. The 81 year-old led the family business together with two chief executives.

After the death of his father when he was just seven years old, the young Brandstätter trained as a mould maker and at the age of 21 turned what was then a metal specialist company on its head by switching to plastic. His early move into the material helped him make a killing turning out hula-hoops in the late 1950s.

But the breakthrough for the family business came in 1974 with Playmobil. Against the backdrop of the global oil crisis, Brandstätter gave his master craftsman Hans Beck the task of developing a brand new toy system with minimal use of plastic. And so Playmobil was born.

Soon the square, colourful, 7.5cm tall figures were dominating children's bedrooms across Europe, and became a huge source of income for the medium-sized Bavarian firm. “Back then the success of Playmobil saved us from going bankrupt,” Brandstätter later revealed.

Since then the company has sold 2.8 million Playmobil figures worldwide, according to their own records.

The annual turnover of the business – which still also makes plant pots and garden furniture – was €596 million in 2014.

Unlike the majority of other toy manufacturers, Branstätter also avoided setting up his production in Asia.

Playmobil's biggest factory is in Dietenbach, northern Bavaria, not far from Nuremburg. The company also has factories in Malta, Spain and the Czech Republic.

In order to ensure the future of the Playmobil brand and its more than 4,000 employees, Brandstätter made plans to turn the company over to a foundation, which would take over ownership after his death.

In the later years of his life he gradually stepped back from the daily running of the business.

He once said “there are bosses who sit at their desk as if their life is eternal,” but instead Brandstätter spent much of his old age enjoying the sun in Florida and his love of golf, which wasn't just a hobby, but a “mental and physical necessity”.