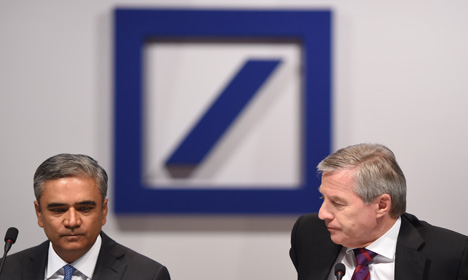 Jain (left) and Fitschen are leaving their top positions at the German banking giant. Photo: DPA

Co-CEOs Anshu Jain and Jürgen Fitschen are stepping down to be replaced by former UBS banker John Cryan.

Jain and Fitschen have led the banking giant since May 2012. Jain will step down at the end of this month, making way for Cryan, while Fitschen will leave in May next year, the bank said.

The joint resignations follow a series of financial missteps and regulatory penalties at the bank, whose headquarters is in Frankfurt. The bank repeatedly fell short of its own and outside analysts’ profit forecasts.

In recent weeks, the pressure on the two men has intensified. Shareholders and employees have been losing confidence in the bank’s performance and the management team’s turnaround plans.

Jain, 52, was the target of an open letter sent to Deutsche Bank employees last month in which labour-union representatives demanded he leave. Fitschen, 66, is on criminal trial in Germany related to the collapse of the Kirch media empire. He has denied the charges.

The two men’s successor, 54-year-old Crayan, was a senior executive at Singapore’s Temasek and joined Deutsche Bank’s board after leaving UBS in 2011.