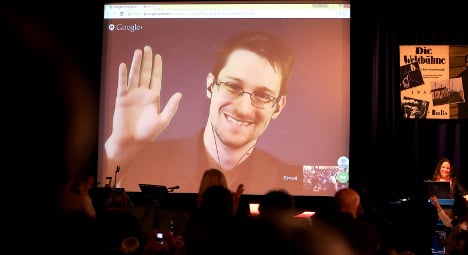 “Surveillance should only be allowed to happen when there is concrete suspicion and the measures are targeted, ordered by a judge and also proportional,” said Amnesty International Germany digital rights expert Sebastian Schweda.

“Anyone who knows that that information about his calls and SMS, internet activities and places they go is stored, will perhaps think three times if he really wants to call the HIV advice centre, go to union meetings every week or organize a demonstration using a telephone chain,” Schweda added.

In Germany, activists took the opportunity to add new charges to a 2014 case filed with the Attorney-General (Generalbundesanwalt), calling on the top lawyer in Germany to begin an investigation into the government and secret services.

“We call on the Attorney-General finally to begin the investigation, since there is a crushing weight of evidence for at least the suspicion of illegal activity,” lawyers Hans-Eberhard Schultz and Claus Förster wrote, acting on behalf of the Chaos Computer Club (CCC) and an alliance of NGOs, netzpolitik reported.

So far, the Attorney-General has only begun an investigation into the alleged hacking of Chancellor Angela Merkel's phone.

What we know now

In a joint report, Amnesty and Privacy International recap what Snowden's leaks revealed about mass surveillance and how the world has reacted.

The so-called 'Five Eyes' espionage alliance of anglophone countries, including Australia, Canada and New Zealand, but led by the NSA and the UK's Government Communications Headquarters (GCHQ) has far-reaching access to digital communications of all kinds in countries across the globe.

Tapping into the data of internet giants like Facebook, Google and Microsoft, chokepoints such as undersea cables and satellite links, mobile phone network operators and other sources, they gather huge amounts of data on hundreds of millions of ordinary people worldwide.

Most recently in Germany, it emerged that the NSA included “selectors” (surveillance targeting information) for German and European companies and public officials, including Airbus and members of the French President's office, in lists sent to the BND for the Germans to carry out surveillance on their behalf.

The government was accused of lying to parliament when it emerged that it had known for years that the NSA was asking the BND to conduct economic espionage and spy on allies for the US.

A poll conducted by Amnesty International in February 2015 found that Germans were the most strongly opposed of any nationality to the government snooping on their phone calls, with 69 percent saying they were against it.

And 81 percent of Germans said they did not want the United States in particular to have access to their internet usage.

International organizations including the United Nations and the Council of Europe have spoken out against the practice of mass surveillance, with the UN Human Rights Council (HRC) establishing a permanent position of Special Rapporteur on the right to privacy in March 2015.

Courts in the UK and the US found that the countries' intelligence agencies had breached their respective laws with parts of their surveillance programmes.

And ten of the largest technology companies, including Apple, Facebook, Google, Microsoft, Twitter and Yahoo!, launched a lobbying campaign to end bulk collection of their users' data, with several companies also moving to strengthen encryption and security on their services.

Snowden himself received the prestigious Stuttgart peace prize in November 2014, while the first journalist he approached with the story, Glenn Greenwald, accepted the Scholl Siblings Prize for whistleblowing – named after heroes of the anti-Nazi resistance – in December.

In the teeth of massive public disapproval and legal setbacks, governments and the security services have continued to push for more powers of mass surveillance.

In Germany, the government pushed ahead in May with plans to require telecoms companies to keep customers' data for up to ten weeks in case the security services need it for an investigation.

Similar plans have already been rejected by the Court of Justice of the European Union and the German Constitutional Court.

A parliamentary inquiry into spying by the NSA and the BND has met with bitter resistance.

The MP chairing the inquiry had his phone hacked and then tampered with in the post on its way to government security technicians.

And the BND itself has warned that probing too deeply into its co-operation with foreign intelligence services could put Germany at risk, while Britain's GCHQ threatened Germany with cutting them off from shared intelligence.