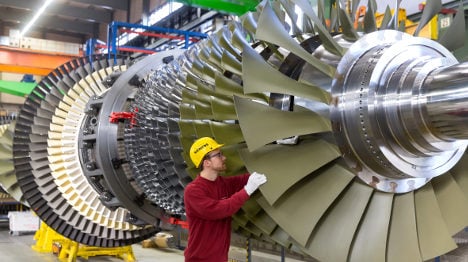 A Siemens worker inspects parts of a gas turbine at a Berlin factory. Photo: DPA

That marked an “appreciable” upgrade from the central bank's previous economic projections in December, when it had pencilled in growth of 1.0 percent for this year and 1.6 percent for next year.

With those growth rates, “the German economy would expand at a faster pace than potential output at an annual rate of 1.2 percent and aggregate capacity utilisation would greatly exceed the multi-year average at the end of the forecast horizon,” the Bundesbank wrote.

“Compared with the December projection, GDP growth expectations for 2015 and 2016 have been raised appreciably by 0.7 and 0.2 percentage point, respectively. This is primarily a result of the changed underlying conditions, which already positively influenced the fourth quarter of 2014 and the first quarter of 2015,” it said.

The German economy effectively ground to a halt in the middle of last year, but picked up again at year's end to show growth of 0.7 percent in the final quarter and expansion of 0.3 percent in the first three months of this year.

“The German economy has recovered from the lull in mid-2014 more quickly than expected and has returned to a path of growth that is supported by both internal and external demand,” the Bundesbank said.

“The domestic economy is notably reaping the benefits of the favourable labour market situation and substantial income growth. This is having an effect on private consumption as well as on housing construction,” it wrote.

While foreign business was currently burdened by “dampening effects emanating from the global economy … this is balanced out by the depreciation of the euro and the improving economic recovery in the euro area,” it continued.

“Moreover, the global economy is likely to pick up steam again in the near future,” the Bundesbank added.

The promising overall scenario was reflected in positive sentiment, it continued.

“Enterprises still consider their situation to be exceptionally good,” it said.

According to the survey published by the German Chamber of Commerce and Industry (DIHK) in the early summer, nine out of 10 firms were “at least content” with their situation.

Other leading sentiment surveys, such as Ifo and the Centre for European Economic Research, painted a similar picture.

“Firms are also looking to the future with a fair amount of confidence. That said, their sense of optimism is not as pronounced as it was at the beginning of last year. According to the DIHK, sentiment is clouded by fears concerning Germany's economic policy framework, labour costs and the labour supply,” the Bundesbank cautioned.