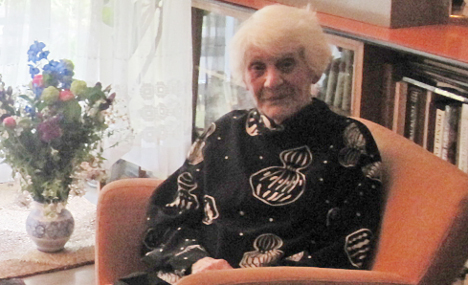 Ingeborg Syllm-Rapoport worked as a junior doctor in a Israeli hospital in Hamburg during the 1930s.

She finished her written dissertation on Diphtheria in 1937/8, but the Nazi authorities stopped her from taking the oral exam required to fully complete the qualification, just because she was Jewish.

But after 77 years the long wait for Syllm-Rapoport is nearly over. In May she finally took the oral exam in its modern format at the Hamburg-Eppendorf University Clinic, and will receive her long-awaited doctorate certificate on June 9th.

“We can completely undo the past injustices with this belated doctorate, but at universities and schools we can contribute to dealing with the darkest chapter of German history,” said the Dean of the medicine faculty Prof. Uwe Koch-Gromus.

“For me personally it's not really important anymore, but it does have symbolic meaning,” Syllm-Rapoport told Tagesspiegel. She will become the oldest person in the world to be awarded a doctorate. Syllm-Ropoport moved to the USA after being denied the doctorate the first time around .

But she and her husband felt threatened as well-known communists in the hyper-paranoid McCarthy era and decided to move back to Europe and settle in the German Democratic Republic (GDR, Communist East Germany).

After returning from her exile in 1952, she worked for years as senior professor of neonatology (specializing in newborn infants) at Charité hospital in East Berlin.

In her view, the GDR was not reducible to the caricature of a police state that's remained in the popular imagination.

“There was an unbelievable feeling of comradeship. It was really moving,” she said.

She may have lost her husband 11 years ago, but said that she still had a “lust for life” at the age of 102.