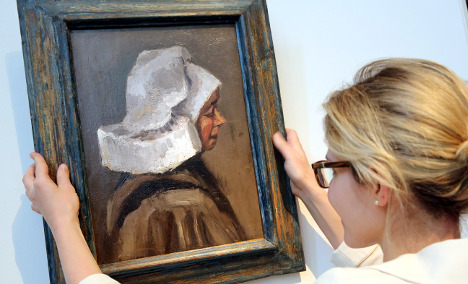 The painting, Head of a Peasant Woman: Right Profile, is the “most valuable work work by Vincent van Gogh to be offered in an auction in Germany since 1945,” according to the Villa Grisebach art house where it is being sold.

The painting depicts a woman turned to the side, wearing a white bonnet. It was part of a series of character studies that the artist conducted of farmers and their wives between 1884 and 1885 before his first prominent art piece, The Potato Eaters.

“The self-contained work group documents a decisive moment in Van Gogh’s path from a self-taught artist, who was influenced by the work of the 'Hague School,' towards an autonomous artist, who was to significantly shape the future of art history through his own work,” wrote German journalist and art market expert Stefan Koldehoff for the auction house catalogue.

According to Koldehoff, the painting can be traced to Van Gogh's sister, who sold it to a junk dealer after the painter left it with his parents in 1885.

In more recent decades, the portrait hung in a private residence in Bavaria, according to the auction house.

The auction is set to begin at 5pm on Thursday.