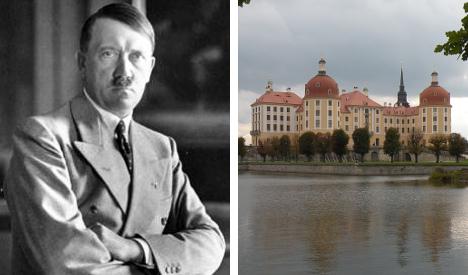 When restauranteur Silvio Stelzer bought a villa on the grounds of the splendid Wasserschloss Moritzburg estate in Saxony, the old seat of the royal family of Saxony, he knew he was moving into a place rich with history.

What he probably didn’t expect was to find quite such a historical treasure when renovating his grounds.

But Bild reported on Thursday that the well-known chef, who has opened a restaurant in the villa, found Hitler’s champagne and cognac cellar in an underground chamber in the extensive gardens.

It's a surprising find for one of history's most famous diet obsessives – the Nazi dictator was a vegetarian, teetotal and a non-smoker.

A ledger found in the house shows how Hitler struck a deal with Prince Ernst Heinrich von Sachsen, who owned the palace at the time.

“At the end of 1944 Hitler had his wine cellar and delicatessens delivered into this underground labyrinth because the airstrikes had made Berlin unsafe,” Stelzer told Bild.

Soldiers delivered the dictator’s treasure, packed in hundreds of boxes on several trucks. Inside were salami, cheese, chocolate, cigarettes and other rare goodies.

“The prince received a special package full of delicacies from the Führer in return.

Unfortunately nothing remains of Hitler's stash.

“None of the goods are left. After May 8th 1945 the Russian troops plundered everything,” said Stelzer.

Stelzer was unavailable for comment when The Local reached out to him.

News of the find adds to a spate of Hitler-related artifacts turning up in recent weeks, including bronze horses that once stood outside the Reich Chancellery found on the German black market and underwear alleged to have belonged to Hitler's mistress Eva Braun.

Correction: The original article stated that Cognac bottles were found in the cellar. The cellars were in fact empty.