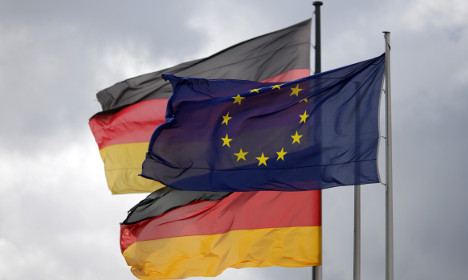 Germans are not so positive about the EU as they were a year ago. Photo: DPA

Positivity about the economy is dropping in Germany, albeit from a very high point. The number of Germans who view their economy favourably dropped from 85 percent in 2014 to 75 percent this year, according to the poll.

Of the six major European countries surveyed by Pew Research Centre, Germans were the only ones more sceptical than the year before. Nonetheless, overall positivity was still much lower in all of France, Italy, Spain, the UK and Poland than in Germany.

The 75 percent of Germans expressing a favourable view of the economy was considerably higher than second-placed UK (52 percent) and in complete opposition to the pessimism of France and Italy where 14 and 12 percent of respondents expressed favourable views, respectively.

Germans are also uncertain about the future direction the economy will take. Fifty-four percent said they think the economic situation will stay the same in the next 12 months, a quarter think it will get better and 20 percent say worse.

This reflects a wider ambivalence about the short-term economic outlook in the surveyed countries. In none of the six countries did a majority believe the economy would improve over the next year.

The long-term outlook is even more negative. Like in every other nation surveyed, a majority of Germans think their children will face a worse economic future than their own.

This opinion might not be as strongly felt as in France where 85 percent think their children will be worse off than them, but 58 percent of Germans still think that things will be harder for the next generation. Only 38 percent voiced the opposite view.

Although 12 months ago only Poles had a more positive view of the EU among the major member states, in the most recent survey only France and the UK – both of which have seen the rise of populist eurosceptic political parties – have a worse opinion of the EU.

Germans are still the most positive about economic integration – unsurprising considering the trade surplus the federal republic runs with its EU neighbours. But on this count, too, public enthusiasm has dropped four percentage points on 2014.

But the 59 percent who see economic integration as a good thing is still well above the median of 46 percent across the six countries.

Support for the euro on the other hand is on the rise in Germany just like in Spain, Italy and France. Seventy-two percent of Germans are now in favour of the single currency, mirroring similarly high scores in Spain and France. Only Italy (56 percent support) lags somewhat behind.

But that said, a surprisingly high number of Germans (50 percent) saw the rise of the eurosceptic Alternative for Germany political party (AfD) as a good thing. This far outstrips the actual support the party has in opinion polls, which lies at around the 5 percent mark.