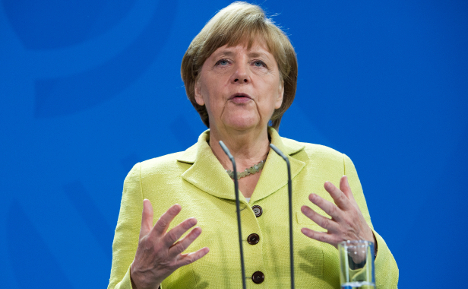 Merkel sought to defend the G7 against accusations that it is a self-interested group for the elite, ahead of the G7 summit being hosted by Germany in Elmau, which kicks off on Sunday.

“Whoever doubts the logic of the summit only need look at current crises to recognize not just the necessity but the duty to work intensively on common solutions,” wrote the Chancellor.

Referencing the Ukraine crisis, the rise of Isis in the Middle East and the Ebola epidemic which spread across much of west Africa in 2014, Merkel said that the world still faced crises on a global scale which needed to be tackled by the seven-member organisation.

She went on to say that the purpose of the G7 is not only to solve global crises, but also that it existed to find a path towards a more sustainable economic future.

Merkel added that such a goal could only be achieved with “strengthened international trade on the basis of high social and ecological standards” – a thinly veiled reference to the controversial proposed free trade agreement between the EU and the US, TTIP (Transatlantic Trade and Investment Partnership).

The agenda of the Elmau summit would focus on two central goals, she said.

“The first is to set out new targets for sustainable development. The G7 should commit itself to wiping out world hunger and extreme poverty by 2030. Only when we have been able to achieve this can other development goals have a chance of success.

“The second great task is global warming. With the upcoming conference in Paris in December, we have the first chance in years to reach an agreement on emissions to which all nations are bound. Through this, we can come a bit closer to ensuring that we keep global temperature rises under two degrees,” she wrote.

She argued that the developed nations needed to stick to the agreements made at the Copenhagen climate conference in 2009, specifically in regards to the commitment to provide $100 billion to developing lands each year from 2020 onwards for protection against climate change.

Germany will double its commitment between now and 2020, the Chancellor confirmed.

Regarding epidemics that have the potential to spread across borders, the Chancellor said that there is a need to learn from the Ebola epidemic. She said that they would be consulting with people from the countries affected by Ebola so that they could develop strategies to better prepare for future outbreaks.

She also mooted the setting up of a global task force to fight highly contagious viruses. She said that while it was a middle-term goal “we should fix our sights on it now”.

Merkel mentioned improving working conditions along the global production chain and facilitating access to education for women in the developing world as subjects up for discussion at the summit.

“To realize all these goals, we need many more partners. I’m convinced that the G7 can be the engine for a world worth living in, and that it must be that,” Merkel concluded.