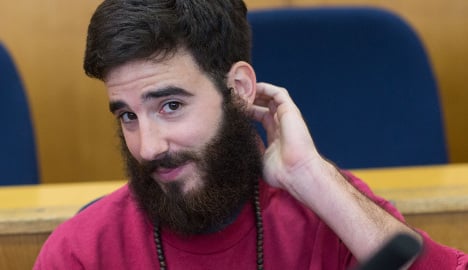 Accused Federico A. in court on Wednesday morning. Photo: DPA

The accused, Federico A., told the Frankfurt district court that he had thrown the stones after a female friend had been beaten by police officers and that he had reacted to violence with violence, Focus reported.

Prosecutors have brought charges of grievous bodily harm and serious breach of the peace against the 23-year-old, the only protestor to face the law so far.

They say he hurt four policemen through his actions during demonstrations organized by the left-wing protest movement Blockupy on March 18th.

Since the accused has no address in Germany, he has been in police custody since his arrest.

Fellow demonstrators from the Blockupy movement picketed the court on Wednesday morning as the defendant went through his first hearing.

Solidarity-Meetup for #freeFede is going to start in this minutes! Solidarity is a weapon! #blockupy pic.twitter.com/87NcV2ly2F