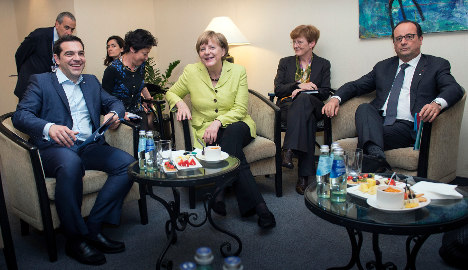 While the official reason for the leaders' gathering is a discussion of the EU's digital strategy with business leaders, it's inevitable that Greece will come up, after Prime Minister Alexis Tsipras struck a tough new line in an op-ed for French newspaper Le Monde on Sunday.

“I don't share the idea that we'll have fewer worries and constraints if Greece gives up the Euro,” Juncker told the Süddeutsche Zeitung.

Indeed, problems for the eurozone could multiply in case of a Grexit, as “the idea would be planted in people's heads that the Euro is not irreversible” – a massive discouragement to international investors in the single currency area.

Juncker called on the International Monetary Fund (IMF) to help Europe by lending more money to the Greeks, saying that “I can't imagine us going on alone.”

He was responding to comments by IMF boss Christine Lagarde, who said at last week's meeting of G7 finance ministers that saving Greece was the eurozone's problem.

“Without the IMF, it wouldn't work,” Juncker said – pointing out that national parliaments, including the German Bundestag (parliament), would balk at funding more loans to Greece alone.

Volker Kauder, leader of Merkel's Christian Democratic Union (CDU) group in the Bundestag, told ARD television on Sunday night that “the IMF must be involved”, or he would vote against further loans for Greece.