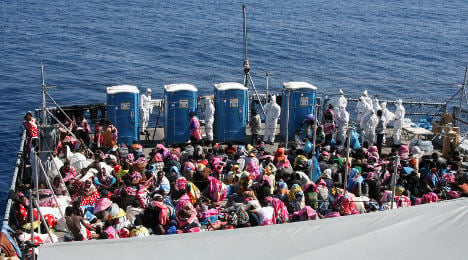 Refugees aboard the German frigate Hessen after being rescued in the Mediterranean. Photo: DPA

“Deep discussions are necessary at the European level” to achieve a balance between “responsibility” and “solidarity”, said a joint statement from the French and German interior ministers.

They said efforts taken by countries in welcoming asylum-seekers should be “better taken into account”.

On Wednesday, the European Commission asked member states to admit 20,000 Syrian refugees from outside Europe and process another 40,000 asylum seekers from Syria and Eritrea landing in Italy and Greece.

The distribution would be bound by complex rules: national economic output, population, unemployment rates and the number of refugees already admitted to an individual country.

France was told to open its doors over 9,000 refugees over the next two years, with Germany's figure closer to 12,000.

But Paris and Berlin said: “Additional solidarity is only possible if the member states at the first point of entry… take, with support from the European budget, all the financial and legal measures possible to boost surveillance of the external borders.”

France and Germany proposed the establishment of so-called “hotspots” to process asylum-seekers close to the point of entry to identify them and then decide where to place them.

“Part of the asylum-seekers in obvious need of protection will be relocated in other member states, using the redistribution ratio agreed,” said the Franco-German proposal.

“Irregular migrants” will quickly be returned or removed, according to the proposal, adding that “better contacts” needed to be established with their countries of origin to ensure an easier returns process.

“Migrants that do not belong in either category will have their situation examined within the framework of the common asylum procedures, in the country of first entry,” proposes the Franco-German plan.

Additionally, the two countries called for “solutions to limit secondary migration movements” which is putting at risk the idea of sharing the burden between EU states.

SEE ALSO: Germany to take most in refugee quota project