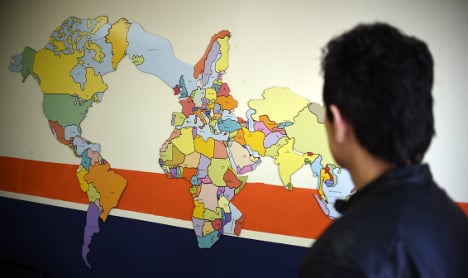 The world is your oyster. Photo: DPA

As well being the second-most attractive country for immigration, 3.4 million Germans were living in other developed countries in 2011 – roughly the population of Berlin.

This makes Germany the fifth-biggest country of origin of emigrants living in the OECD after Mexico, Britain, China and India.

1.1million of these Germans live in the United States, and 270,000 each live in Britain and Switzerland. France, Italy and Spain are also popular spots where Germans like to settle.

Flavia Westerwelle, who moved from Germany to the US 18 years ago, spoke to The Local about her experience emigrating and setting up ausgewandert.com, an organization for German expats and businesses looking to set up shop in the US.

“On the surface lots of emigration from Germany can be seen as a negative sign, because it means that people are unsatisfied with their lives, and think things will be better elsewhere.” she said.

“But on the other hand, it also showcases a certain openness, flexibility, courage and entrepreneurial spirit, which via feedback and exchanging experiences with emigrants can lead to a deeper understanding of your own country,” she added.

Between 2001 and 2013, three times as many Germans immigrated to other European countries than OECD countries outside Europe. Switzerland, Austria, Britain, Spain and the Netherlands have been particularly popular in recent years.

The level of education of German emigrants is generally high and continues to rise. 1.4 million of them have the Abitur (end of school diploma) or a vocational qualification. A further 1.2 million are university graduates.

Due to the high proportion of well-educated women, the number of highly qualified emigrants has increased by 40 percent over the last decade.

In Switzerland alone, the number of highly qualified Germans has doubled to 150,000 since 2001.

A total of 46,000 Germans living in the OECD hold a doctorate.

Germans tend not to waste any time after leaving school when it comes to moving abroad. No other OECD country sends as many students abroad as Germany.

Considering the average level of education of many emigrants, it is no surprise that career prospects are the main reason for leaving Germany.

Work is equally important when it comes to Germans who return to their homeland, but family and friends increases in importance for those considering retuning.

“It is also often neglected in the media how many Germans emigrants actually return home,” said Westerwelle.

According to surveys, 15 percent of Germans are considering moving out of Germany, and the figure is as high as a third among the unemployed.

Only a small proportion of these people actually go through with it. Germans who want to emigrate are generally less satisfied with their lives than their fellow countrymen, who aren’t considering moving abroad.

“Lots of people emigrate on false information about the destination country, and only when they find out that living abroad isn't always like a dream or a holiday, do they then realise that the conditions in Germany really weren’t so bad after all,” said Westerwelle.