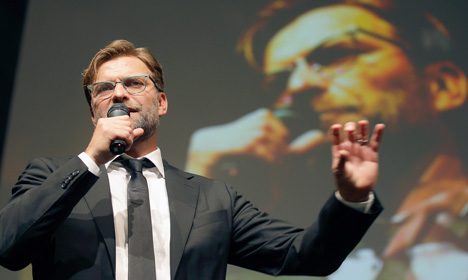 Dortmund were denied the fairytale farewell at Berlin's Olympic Stadium as Pierre-Emerick Aubameyang's early strike was cancelled out by three goals in 16 first-half minutes as Wolfsburg claimed a 3-1 victory on Saturday.

Having led Dortmund to the 2013 Champions League final after winning the Bundesliga in 2011 and claiming the German league and cup double in 2012, this was Klopp's final bow after seven years as Thomas Tuchel takes over next season.

His farewell party in East Berlin went on until just before 0500 local time (0300 GMT) on Sunday and amongst his parting gifts were Dortmund season tickets for his family.

Klopp has given no hint of his future, but given his impressive pedigree the 47-year-old is unlikely to be away from football for long with several English sides reported to be interested.

“This is here and now my hardest moment,” Klopp told around 2,000 guests at his party.

“The pain of saying goodbye is building slowly and it really hurts. I have tried to express my thanks to each player, because it has been to me an extraordinary pleasure, a great honour to work with them and I find it hard to let go. I know life goes on.”

Dortmund were left to rue their wasted opportunities as Marco Reus fired over the bar in the first-half with his side leading 1-0 and Borussia were denied a clear late penalty.

The defeat means Dortmund must now go through the qualifying rounds for the Europa League having missed the chance to claim a direct entry had they won the final.

Dortmund's defeat now means archrivals Schalke qualify directly for the Europa League because of their sixth-place finish in the Bundesliga.

Dortmund fans chanted Klopp's name after the final whistle, but he said it was little comfort after the defeat.

“It was a great thing to hear, but was little consolation after the defeat,” he said.

“We've grown together over the years, but it wasn't any comfort. When you have wanted something so badly, and then not achieved it, you need a moment to gather yourself. Someone said to me, it would have been too kitsch to have bowed out by winning the cup, that would have been almost typically American.”

Klopp baulked when asked if he imagined himself as Schalke coach next season to replace Roberto di Matteo, who resigned last week, but Eintracht Frankfurt are eager for him to replace recently-departed Thomas Schaaf.

“The number of candidates is a prime number.”

And Wolfsburg coach Dieter Hecking said Klopp's farewell is more of a “see you soon”.

“Too much was made of this being Klopp's final game in the build-up,” said Hecking, who won the first title of his career at 50.

“We'll see him coaching somewhere else soon, I'm sure, and I looked forward to seeing him around again.”