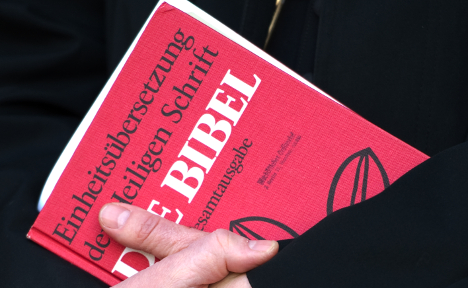 "I don't need to justify it because it's in the Bible". Photo: DPA

According to Spiegel, the headteacher of Geretsried comprehensive was covering a lesson for a class of 14-15 year-olds when a debate broke out after the class refused to say a prayer.

At the end of the debate, he said atheists were stupid, sparking outrage among teachers, parents and students alike.

Not all pupils are baptized, and some teachers – including the biology teacher – don’t believe in god, leaving a sizeable proportion of the school community feeling insulted.

In a later debate with students who challenged his insult against atheists, the head teacher said “I don't need to justify that because it's in the Bible.”

One father told Spiegel that the head master had blessed his daughter without asking her when she turned up to school with a lollipop during fasting time.

When introducing daily prayers to the school, the headteacher quoted a letter from the ministry of educational and cultural affairs from 1987.

“The ministry appreciates that in lots of schools prayer has always been a practice that is welcomed and practiced by pupils and teachers.”

When a number of teachers opposed his hanging crosses in classrooms, the head justified the move by using the Bavarian constitution.

Article 131 says that “respect for god” is one of the educational objectives of the state.

There was considerable public controversy when the Federal Constitutional Court declared a Bavarian law requiring a crucifix in every classroom to be unconstitutional in 1997. Bavaria replaced it with a law still demanding the same, unless parents filed a formal protest with the state.

That means the head teacher has every right to put crosses in classrooms, unless the parents organize and make a formal complaint.

In France it's forbidden to wear religious symbols in state schools, so to display a cross in the classroom would not be allowed. Religious education is also not taught in French state schools.

Apart from Bremen, Berlin and Brandenburg, religious education is taught as an optional subject in German schools.

Traditionally, teaching focuses on the most common religions, Protestant and Catholic Christianity and Judaism.

Because of the considerable Muslim population in Germany today, German schools are gradually integrating Islam into the curriculum, and some states have granted Islam the same legal standing as the Christian churches.

In France the wearing of the burqa has been banned in public places, including schools.

And until recently it was against the law in half of the German states for teachers to wear the headscarf, including in Bavaria, where the Christian headmaster is introducing his beliefs.

That ban was  struck down in March after the German Constitutional Court ruled that it violated religious freedom.

The UK has no such ban on religious symbols, because it has an established church and no written constitution. It has compulsory religious education, which is intended to be varied and balanced, including lots of different religions.