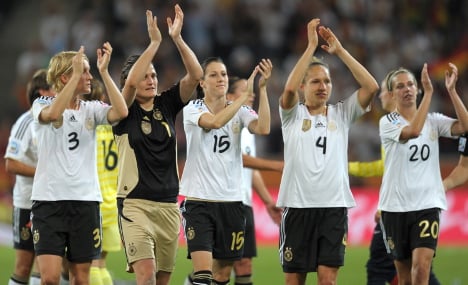 Germany are among the favourites. Photo: DPA archive

But if the Frauschaft (the female version of the national Mannschaft) are to lay their hands on the coveted prize, they will have to negotiate an extra round – an extra 8 teams have been added to this year’s tournament, meaning that it will include a round of 16.

Germany’s tournament kicks off in Ottowa on June 7th against the Ivory Coast. Matches against Norway and Thailand will follow on June 11th and 15th.

The women could keep another hot summer for German sport going, after Frankfurt took home the Champions League crown in a final against Paris earlier this month.

Coach Silvia Neid believes that while Germany are among the favourites, competition is fiercer than ever before.

“If we win our group we’ll face the third team in a group with the USA, Sweden, Nigeria and Australia – it could get pretty tricky then,” said Neid.

The national coach said that any one of host Canada, title holder Japan, two time champion the USA, Brazil, Sweden, France or Norway stood a chance.

“Of course we belong in this group [of potential winners] too. But we’ll need a lot of patience. The little details and form on the day will be decisive,” said Neid.

One complication of the tournament is that it will be played on artificial turf, a fact that has not gone down well with the competitors, 50 of whom brought a case against world football body FIFA in a Toronto court. Due to limited chances of success the case was withdrawn.

“Artificial turf is totally new territory,” said Neid. “We’ve noticed that you can’t play so much on the run, but have to pass much more to feet.”

“We need to get used to it – not only because the ball rolls more quickly on it, but also because it is more strenuous on the body,” said defender Saskia Bartusiak.