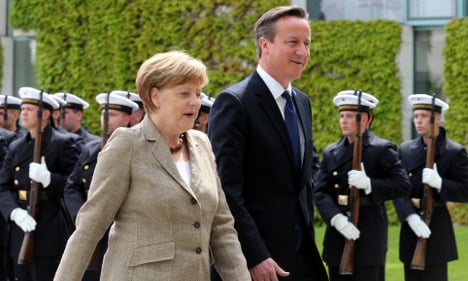 In contrast to previous frosty receptions from Merkel to Cameron's pushes for reform, she welcomed the newly-reelected Prime Minister and promised constructive talks.

“Where there's a will, there's a way,” Merkel said. “We can't say that treaty change [to the agreements underpinning the EU, a difficult and complex process] is totally impossible.”

Cameron had come to Berlin in search of support for his shopping list of reforms, including tougher rules against migrants claiming benefits, protection for the City of London, and an exemption from the Treaty of Lisbon's promise to strive for 'ever closer union' among EU countries.

“We already have a multi-speed Europe,” Merkel said, noting that some EU member states remained outside the Euro single currency and the Schengen free-travel zone.

“We will continue to have two speeds, and I don't see a problem with that.”

In bullish mood thanks to the Chancellor's accommodating tone, Cameron said that he had “every confidence” that he would get the changes he wants from the rest of the EU.

“The substance of what needs changing is clear,” he said. “Let's get it sorted out and make the changes that are necessary.”

“The EU has shown before that it can be flexible,” Cameron added. “I'm clear on the outcome that I want, the changes that will address the concerns people have, and as we address those we will see that it's right for the UK to stay.”

One surprise came when Merkel suggested that Germany itself might have changes of its own if Britain's push for reform bore fruit.

“I don't rule out that Germany might also want to change something in this area, that might come up during negotiations,” she said.

Both countries made much of their mutual economic interests, with Cameron praising the push for a free-trade agreement between the EU and USA, also noting that Germany is the biggest European investor in the UK.

The two leaders' close harmony was in contrast to the lukewarm agreement from French President Francois Hollande at a Paris meeting with Cameron on Thursday.

And after her own meeting with Cameron, Polish Prime Minister Ewa Kopacz said that her country would respond with a “definite no” to his hoped-for migration reforms.