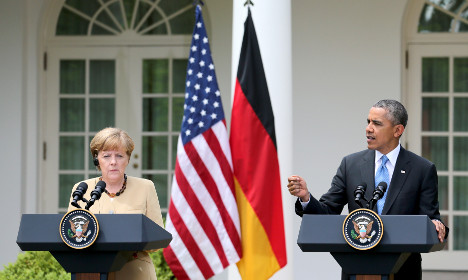 In the run-up to the federal elections in 2013, the coalition government led by Angela Merkel's Christian Democratic Union (CDU) led the German public to believe that Washington was prepared to negotiate on an agreement that would commit them on paper to carrying out no further spying on the German state.

The then-minister of the Chancellery Ronald Pofalla said on August 12th 2013 that the USA “has offered its agreement to a no-spy treaty.”

Merkel meanwhile said the Americans were 'prepared to negotiate on a no-spy treaty.'

In fact documents obtained by SZ show the government already knew by this stage that the US administration had not given their agreement to such a treaty.

A document from August 7th 2013, which was seen by the Chancellor, shows that while US spy chiefs said they were prepared to discuss such a treaty they they argued that “this decision lies in the hands of the administration.”

On the same day, the document makes clear that then foreign minister Guido Westerwelle called his counterpart in Washington John Kerry to discuss the issue.

Kerry provided him with 'no concrete confirmation' reads the document.

Should there have been no confirmation within 24 hours Angela Merkel was to call president Barack Obama. This telephone call does not seem to have taken place.

Up until now, writes SZ, the official version of events was that the government was optimistic for American cooperation on a no-spy treaty.

The latest document shows that the American administration had not proven willing to negotiate on such a treaty.