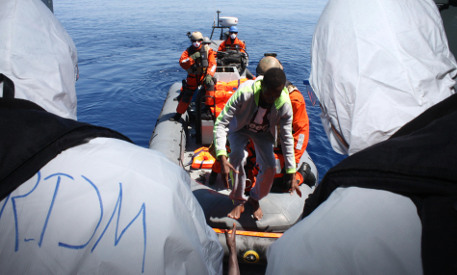 The German navy rescues refugees in the Mediterranean. Photo: DPA.

Germany's is set to resettle 11,849 asylum seekers, meaning it will take in just under 20 percent of the total population of refugees.

The proposals also come as a reaction to the high death toll on the Mediterranean Sea as an estimated 1,800 refugees have lost their lives trying to cross into southern Europe this year.

The project has gained the support of southern European states, but was furiously opposed by the United Kingdom and certain eastern European countries.

Two-thirds of the refugees are to be resettled from Greece and Italy, the most common arrival points for those seeking to enter Europe. This group is made up of people from Syrian and Eritrean backgrounds who arrived in the EU after April 15th 2015.

Of these refugees, Germany will take in over 6,500 people.

The other 20,000 will be refugees resettled from outside European borders, but who are recognized to have a “clear need” of international protection. Of these 20,000 refugees, Germany will take in 3,086.

The number of refugees each country receives will depend on its population size, economic strength and level of employment.

“This is why our proposals include the strong requirement that asylum rules are properly applied, and that member states do everything they should to prevent abuse.”

France is set to be the second largest country for refugees, taking in 9,127 of the refugees in the quota system.

The UK is notably absent from the project to relocate refugees registered in Italy and Greece, a move which breaks the Dublin Agreement, the long-established system of registering asylum seekers in the country of their arrival.

But the UK will contribute to the resettlement of refugees taken from outside the EU.