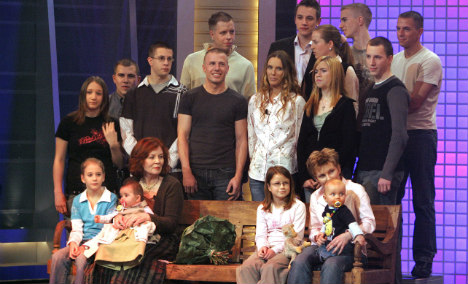 The three boys and one girl were born premature at 26 weeks in a Berlin hospital but have “good chances of surviving,” the report said.

The mother, Berlin resident Annegret Raunigk, is an English and Russian teacher close to retirement and in addition to her 13 children is grandmother to seven.

RTL said the new arrivals make her the world's oldest mother of quadruplets.

She became pregnant after undergoing several artificial insemination procedures in Ukraine, said broadcaster RTL, which has negotiated exclusive rights to the story of the births.

Raunigk made headlines in April when the German press first reported that her latest artificial insemination attempt had resulted in a quadruple pregnancy.

At the time, she said she decided to try to have another child because her youngest daughter, who is nine, wanted a little brother or sister, according to RTL.

The Bild am Sonntag tabloid quoted Raunigk, whose oldest daughter is reportedly 44, recalling that it was “a shock” when the doctors first broke the news to her of a quadruplet pregnancy.

“After the doctor discovered there were four, I had to give it some thought to begin with.”

But she did not consider reducing the number of embryos and said she had no reservations about the challenge facing her.

“I'm not actually afraid. I simply assume I'll remain healthy and fit. In matters of organisation I have enough experience, that's not new for me,” she was quoted as saying in Bild.

Asked about moral doubts, RTL quoted her as asking: “How does one have to be at 65? One must apparently always fit some clichés which I find rather tiring.

“I think, one must decide that for oneself.”

Raunigk made headlines 10 years ago too, when she gave birth to her 13th child, Lelia, at the age of 55.

“At first, I only wanted one child,” Bild quoted her as saying at the time.

“Not all were planned. But then things happen. I'm not a planner but rather spontaneous. And children keep me young.”