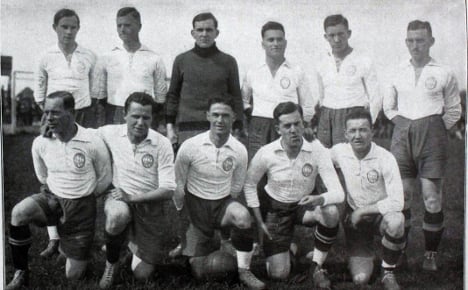 A pamphlet looking back on the first 25 years of FC Bayern's history after its foundation in 1900 has been digitized and can now be read in its entirety online.

Full of brilliantly archaic language and old photos, it offers a fascinating glimpse into the origins of Germany's greatest football club.

“Hard struggles for honour and victory, rapturous applause and unfulfilled hopes all were steps along the long road to the lofty heights where FC Bayern today finds itself,” reads the opening of the book.

“May all achieved here be a gospel to all Bavaria, to believe in the future of FC Bayern with firm, imperturbable confidence, even when disappointments and defeats here and there temporarily threaten to shake this belief,” it continues.

As part of the celebrations in 1925, commemorative matches were organized, including one for “Alte Herren” (elderly gentleman).

The club's ground back in the early 20th Century looked very different to its current home at Munich's Allianz Arena. The book also presents readers with an overview of footballing history in Germany, dating back to the 16th century.

The organized version of the game with set rules came from England, specifically schools like Eton and Harrow, which banned players from using their hands.

It goes on to explain how the English exported the game to Germany in the late 19th century, especially the Rhineland and Heidelberg.

The first modern football club in Germany, the Dresden English Football Club, was established in 1874.

“From city to city of the German Empire the development of the sport of football lead to the foundation of city associations, the first of which was the German Football and Cricket Association in Berlin, set up in 1890.”

In 1893 the South German Football Union was founded, but things developed relatively slowly in Munich.

FC Bayern München was eventually founded in 1900 by photographer Franz John and eleven other men. The German Football Federation and many other clubs across Germany were also founded in 1900.

The first competitive match in spring 1900 was against FC Nordstern. The final result was a record 15-0 victory for FCB. Not a bad start really, and perhaps a harbinger of the great things to come.

The original club colours were blue and white, the colours of Bavaria. The first team kit then changed to a white shirt and black shorts. In 1905 the shorts changed to red.

It was not until 1968 that the red and blue worn today became their home strip. From 1974 onwards the home colours have more often than not been red.

The Bundesliga as we know it today became the first professional national league in 1963.

Bayern had managed to create a carefully developed youth system with over 200 young players by 1914, but it was destroyed by the outbreak of war, as promising youngsters became old enough for conscription.

The book included a list commemorating all the players who were killed in the First World War. Not only was the club's progress ravaged by the First World War, in the 1930s they suffered under the Nazi regime.

At the time the president and coach were both Jewish, so had to flee the country. FC Bayern were then dubbed the “Jew's Club” and support severely waned during the Third Reich.

The club has certainly come a long way since this period, and it is fitting that the history of their first 25 years was rediscovered in the year that the club won its 25th Bundesliga title.