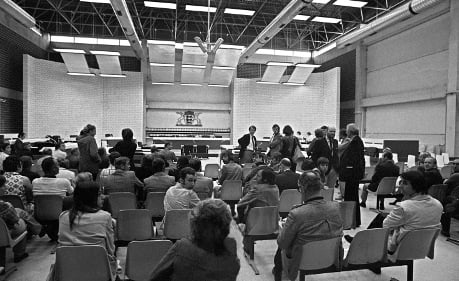 The Stammheim trail – named after the prison at which it was held – was three years in the making.

Preparations for the trial had been complicated by the huge amount of evidence that had to be sorted through and the special security conditions which the state had put in place.

The ringleaders of the RAF – also known as the Baader-Meinhof Gang – Andreas Baader, Ulrike Meinhof, Gudrun Ensslin and Jan-Carl Raspe, had all been taken into custody during the summer of 1972. They faced trial on four counts of murder and 54 counts of attempted murder.

The defendants were considered such a high security risk that a rather unusual security arrangement was made at Stammheim. An entire courtroom was built at the high security prison to avoid the need to transport them between prison and court, when police feared their acolytes could try and force their escape.

The court had no windows and was built of thick concrete. It was surrounded with a wall, razor wire and a tall metal fence. The state was taking no chances.

Their fears were not ungrounded.

Historians tend to to trace the beginning of the group back to a point five years earlier in 1970 when Meinhof colluded in Baader's escape from prison.

Baader and Ensslin had been convicted of arson on a department store in Frankfurt in 1968. The two of them fled to Italy while the high court considered their appeal, but the law finally caught up with Baader when he was stopped at a police check-point in Berlin in Spring 1970.

Meinhof, a well known left-wing journalist, managed to convince prison authorities to allow Baader to accompany her on a research trip to the German Centre for Social Studies. Once there two of Meinhof's associates shot a member of staff and Baader escaped out a window.

A month later in June 1970 the group published its founding document declaring war on the state.

From then on the group continually managed to elude the authorities, first travelling to the Middle East to train with Palestinian militias, then avoiding detection in West Germany for two years as they carried out a series of bank robberies and bombings across the country.

But the police net slowly closed around them. On June 1st 1972 Baader and Raspe were arrested after a shoot out with police in Frankfurt. The two women were found soon after. When the trial opened the prosecution presented a case containing 50,000 papers. The indictment alone ran to 354 pages. 1,000 witnesses had been called. 1,000 police reports and 40,000 pieces of evidence lay at the state's disposal.

This was testament to the the trail of destruction the group had left in its wake. Two policemen murdered, bomb attacks on targets including the publishing house Axel Springer and U.S. Army barracks in Heidelberg leading to the deaths of four people.

But the RAF was born out of a youth movement which had widespread sympathy among many Germans of the post-war generation.

Anger that members of the Nazi party still remained in positions of authority two decades after the end of the Second World War, and bitterness over the actions of Germany's ally the USA in Vietnam, had pushed thousands of students onto the streets in 1968.

The first generation of RAF leaders were themselves educated members of this movement. Ensslin had a doctorate from the Free University in Berlin. Baader and Meinhof were the children of academics.

The death of a student in a 1967 demonstration at the hands of police and a subsequent attack on one of the leaders of the movement, Rudi Dutschke, served to radicalise sections of the student movement.

Baader, who had a long history of violence and law breaking, was at the head of this more violent trend. His attack with Ensslin on a department store in Frankfurt in 1968 was to mark the turning point, when sections of the German left began to legitimize violence. French Philosopher John Paul Satre briefly brought international glamour to the Stammheim trial when he visited Baader in jail in late 1974, He had called the RAF an “interesting group”, but after his chat with the German terrorist he was reported to have called him an “arsehole.”

The trial led to several precedents in German law. When the defendants repeatedly refused food the court allowed the trial to proceed in their absence because they were the cause of their own ill health.

The federal parliament also passed laws limiting the rights of lawyers. If a defence lawyer was suspected of conspiring with a defendant they could be banned from the trail.

It took almost two years before the verdict was given. But on April 28th Baader, Ensslin and Raspe were given life sentences. Meinhof had hung herself in her cell a year earlier.

Hers was not the only death during the trial. Three weeks before the verdict RAF members shot and killed the head of the prosecution along with two companions as they drove through Karlsruhe.

After the verdict the RAF upped its efforts to secure the remaining leaders' release. They abducted Hans Martin Schleyer, the president of the German Employers Association and a former member of the Nazi party, then colluded with Palestinian terrorists in the hijacking of a Lufthansa plane.

But after the the German military stormed the plane on October 18th and secured the release of all passengers on board all three convicts were found dead in their cells, after apparently committing mass suicide.

The RAF formally dissolved two decades later, but the deaths of the Stammheim trail and its aftermath brought to an end the most infamous chapter in the group's history, one when its leaders posed a genuine threat to the stability of the German state.