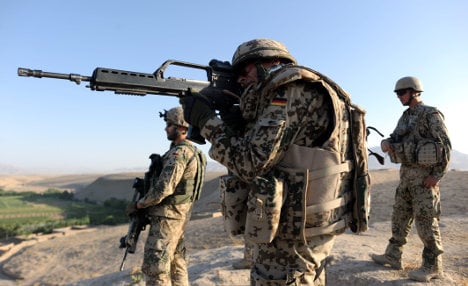 The G36 rifle has proved an embarrassment for the defence ministry. Photo: DPA

“The financing situation today is clearly insufficient,” the army's most senior soldier told the Süddeutsche Zeitung, complaining that the army had been under-financed since 1990.

With an eye on continuing fighting in Ukraine and threats to other Eastern European Nato members, Kasdof said that “restocking our munitions is not sufficient, we are way behind on modernising our equipment; it is also imperative that we add to our munitions stocks.”

He conceded that defence minister Ursula von der Leyen had started on the path of reform but warned that “in the middle term it isn't sufficient – the required investment is huge.”

Karsdorf, who is stepping down from his post in two months, said “I already said in 2012 [when he took up the post] that we need extra investment of €2.5 billion per year in order to make the army fit for purpose.

As an example of the lack of equipment at his disposal, Karsdorf mentioned night vision goggles, of which he claimed to only have 20 percent of the required amount.

“In terms of night vision goggles for drivers, we only have one percent of what we need.”

The Bundeswehr has been hit by a series of scandals and embarrassments over recent months relating to the battle-readiness of its equipment.

The standard rifle – the G36 – has been revealed to lose accuracy at high temperatures, a fact which the Bundeswehr appears to have been aware of for several years.

2014 saw a succession of embarrassing high-profile failures with helicopters and transport aircraft.

Many of Germany's allies are pushing for the Federal Republic to take a more assertive role in foreign policy.

But politicians are often reluctant to increase army funding for fear of a pacifist public reacting badly.