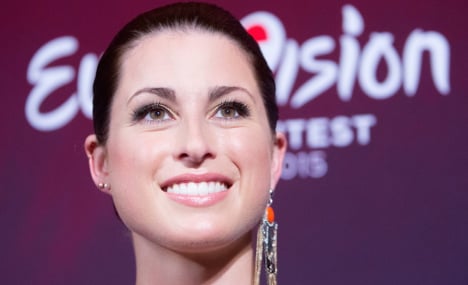 Ann Sophie will be flying the flag for Germany in Vienna at this year's Eurovision Song Contest with her song “Black Smoke”, written by Michael Harwood, Ella McMahon and Tonino Speciale.

On an evening of outrageous choreography, brilliantly trashy euro-pop and general silliness, there is still room for songs with meaning.

Ann Sophie says her song deals with “a situation that many of us are familiar with: being in a long-term relationship and eventually realising that too many wishes have gone unfulfilled and you just can't be together anymore.”

Eurovision has already hit the headlines in Germany this year, when the original winner of the public vote gave up the opportunity to represent his country live on air.

Andreas Kümmert won the hearts of the nation with his song “Heart of Stone” but then shocked the audience when he handed his victory to runner-up Ann Sophie.

The precise reasons for his decision were unclear, but he did describe himself as “just a humble musician”. He added that Ann Sophie would be “much more suited” to represent the nation.

A wildcard entry in the selection process, Ann Sophie may not have been the Germans' first choice, but has received a great deal of support from the public.

She is already bubbling over with excitement at simply being in Vienna for the contest:

We have arriiiiiiiiiiiiived !!!!!!! Sooooo happy and excited!!!!! VIENNA

The 24 year-old was born in London, but grew up in Hamburg and started singing at a very young age. A Britney Spears worshipper, the young singer gathered lots of experience as a child and teenager.

After leaving school she attended Lee Strasberg Theatre and Film Institute in New York, and released her debut album “Silver into Gold” in April.

“What I learned is that every performance is important, and you have to convey this feeling to your audience,” she said.

The annual celebration of everything cheesy, camp, and ridiculous will be held in Vienna, after Austria's entry Conchita Wurst, nicknamed the “Bearded Lady” won last year's contest.

Since blowing away the competition with her song “Rise Like a Phoenix” she has become an outspoken defender of LGBT rights.

The bookies' favourite for this year's contest is Sweden's entry, which does seem to be a real crowd-pleaser.

The semi finals take place on Tuesday and Thursday, but Germany is one of the big five countries (along with France, Spain, Italy and the UK), that qualify for the grand final automatically because of greater financial contributions.

Australia will also be participating in the colourful pop-extravaganza, after years of looking on jealously.

The last time Germany won the competition was in 2010 when Lena dazzled the crowds in Oslo with her hit song “Satellite” – a triumph Ann Sophie will de desperate to emulate.