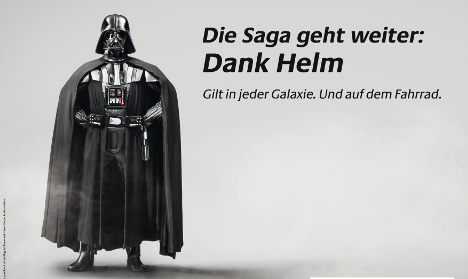 "The tarmac is not as forgiving as I am". Photo: DPA/Federal Transport Ministry

“The saga continues… thanks to a helmet” reads the banner, next to a picture of the Dark Lord striking his familiar dominant pose.

“It's true in every galaxy. And also on a bike,” reads the text underneath.

Fewer than one in five cyclists, or 17 percent, wore a helmet in Germany in 2014, the Federal Road Research Institute found – a small increase on 2013's 15 percent.

That's far short of the 100 percent of Imperial Stormtroopers who wear helmets – although even that doesn't stop them from hurting their heads now and then.

Small children between the ages of six and ten years old were the most likely to wear helmets, at 69 percent – a drop compared with 75 percent the previous year.

Darth Vader might be the right one to convince them that their lack of a helmet is not just disturbing, but also downright dangerous – although he might have to use gentler methods than he did aboard the Death Star.

From Tuesday on, the warning will be displayed on billboards in six cities including Berlin, Cologne and Munich, while 1,000 helmets will be given out for free.

People who take a selfie or a photo with the poster and tweet it with the hashtag #dankhelm can enter themselves and their school class into a contest.

“Wearing a helmet is part of safe cycling,” Transport Minister Alexander Dobrindt said at the launch of the campaign.

Junior minister at Transport Dorothee Bär was a bit more enthusiastic about joining in, posting her own selfie to Twitter: